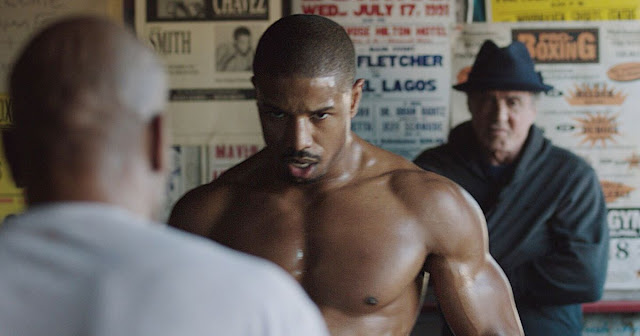 I confess I had never seen a Rocky movie before, nor been convulsing with the desire to before this month, and, for all those who find themselves in similar situations, the antidote to your vast lack of enthusiasm is Ryan Coogler’s Creed. Sylvester Stallone returns as the Italian Philadelphian boxer, now retired, but the fight here belongs to Adonis Johnson, aka Adonis Creed (Michael B. Jordan), the illegitimate son of Rocky Balboa’s longtime rival, Apollo Creed. Coogler also co-wrote the script with Aaron Covington, and this is evidently a very personal project. I've written before that remakes, sequels, and otherwise formulaic stories are not aesthetically marked by that status, and do not signify a lower tier of cinematic quality, as some film pundits seem to continually suggest, and Creed is an exemplary illustration of my assertion.

The action kicks off in Los Angeles in a juvenile detention centre where the young orphan Adonis, an inmate, is in a fight with some other boys (all inmates are black). A woman comes to see the duly confined boy and offers to take him in. She is Mary Anne (Phylicia Rashad), Apollo’s widow, who has come to terms with his infidelity and intends to take care of his son. Adonis lives by his mother’s name, Johnson, and we find him again as an adult, fast-tracked on a shimmering career path in banking, and boxing on a Mexican circuit on weekends. Mary Anne tries to discourage him, reminding him of the immense harm it caused his father (among many other horrible instances, Apollo Creed was killed in the ring), but still supports him in his decision to leave his job and California and pursue boxing in Philadelphia.

Mary Anne’s objections and the story of Apollo’s death work well to establish early on the high stakes involved in boxing, and, in each match in the film, as well as for much of Adonis's training, we’re well aware of the risks he takes stepping into the ring. The actual awesome moment of taking that step, and confronting those dangers, is captured by Coogler and his director of photography, Maryse Alberti, with astonishing intensity and lucidity in a long tracking shot in Adonis’s first professional fight in Philadelphia, which follows him from his entrance into the arena, his stepping into the ring, and his stunning transformation from a young man into a fighter. The shot continues through the end of the first round, and the force of the action and the images Coogler obtains from Adonis’s professional debut are electrifyingly alive.

There is a scene that, while just as absorbing, displays Coogler’s style and inventiveness even more thrillingly. In it, Adonis opens a YouTube video of a fight between his father and Rocky Balboa, and projects it onto a big screen in his home in Los Angeles. While the footage plays, Adonis, who has evidently seen it many times before, gets up and shadow boxes, mimicking Rocky fighting his father. This sparring, while violent in its depiction, reaches a bright lyricism, playing up the Oedipal undertones in Adonis’s story, but also transcribing it to the story of a generation of young black men in America, grappling with absent or disappointing father figures, just as Coogler’s story of Adonis being taken in by Mary Anne cries out implicitly for all the black youths who aren’t taken in, who aren’t given the opportunities they deserve, and whose lives can’t be adequately depicted in such stirring drama.

The cast delivers exactly what you’d expect, and hope for, from one directed by someone as obviously passionate and deft as Coogler. Jordan, playing the street kid who has to live down legacies and stereotypes, evokes a confused and even forlorn innocence at times, beneath a boyish swagger and a clear put-on of a cultural stereotype. Stallone revives Rocky and holds him up staunchly in the face of his own personal demons – his age, his declining health, his absent loved ones – and touchingly lends Rocky the wisdom that comes from the pain of his life, and of the journey on which Adonis is now set. Tessa Thompson (of Selma and Dear White People fame) appears in the film as Bianca, a downstairs neighbour and the eventual lover of Adonis. Unlike him, she is not the daughter of an icon, and has no legacy to propel or deflect her life's trajectories, but is her own creation (fitting, seeing as she is an artist – a musician of some kind). She plays an important part in the vision that Coogler conveys in Creed, and he makes a clear and harsh point about the difference between the fortune-endowed Adonis and the self-made Bianca. Thompson and Coogler render her irresistably, with whimsy and a knowingness that keeps the audience as well as Adonis and even Rocky no less than enraptured.

Creed is an astonishing work that calls to mind all the children less fortunate than Adonis, who have no chance to develop their originality and personal genius, as he has in the ring – those who are left to ordinary racism and neglect and whose endurance makes them all the more heroic. What’s more, it does so without the privileged and condescending tone that well-meaning liberal film-makers often bring to their treatments of race and class in America, such as in the recent hit Beasts of the Southern Wild. Creed, a Hollywood production that bears remarkable artistic force and a refreshing attitude to current racial and social politics, is without question a knock-out.

Creed is currently playing in theatres.