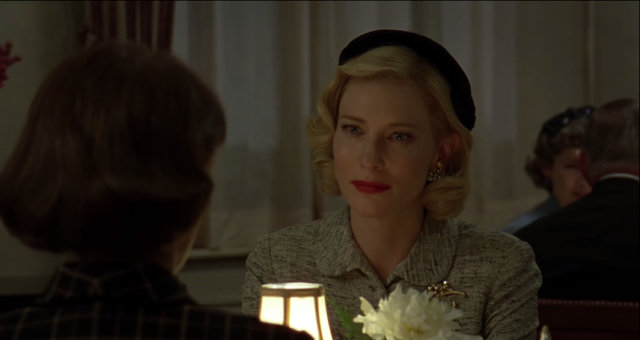 It’s the end of the year 1952. New Yorkers are reeling from a summer of singin’ in the rain, during the heights of McCarthy-era paranoia, and have just learnt that their years of post-war monotony will continue under the man, calm and white-haired, who had launched the successful and epic campaign to bring that war to a just end. In two of the boroughs, Manhattan and Brooklyn respectively, two love affairs are burgeoning and blooming, one illicit and tensely passionate, the other conventionally sacred and cheerful; both are touchingly heartfelt, both have their moments of poignancy and of delight, and both are designs of fiction, comprising the plots of two year-end releases at the movies.

The first, steaming along with an ardour that all but melts its icy setting in Manhattan, is the story of Todd Haynes’s Carol, adapted from Patricia Highsmith’s novel The Price of Salt which tells of a romance between two women, taken from experiences in Highsmith’s own life. In the film, they are Carol Aird (Cate Blanchett), a well-heeled housewife with a wry smile and eyes of exquisite though cold enthralment, and Therése Belivet (Rooney Mara), the reticent and alert clerk who draws and holds Carol’s attention at the toy counter of a large department store. Carol leaves her gloves behind as she leaves – whether or nor by accident is the R2 question – and Therése, finding her information in the store’s accounts, drops by to return them. In ostensible thanks, Carol takes Therése to lunch, and the astute reader will need no further prompting to know where all this is headed.


What is a surprise, however, is the depth and eloquence of expression with which Haynes manages to advance their story and articulate his own ideas. Carol was shot by director of photography Ed Lachmann on 16-mm film, and the grainy effect it yields proves remarkably effective not only at conveying a time and its prevailing moods and atmospheres, but also at capturing the stirrings and thrills of characters’ emotional lives. Blanchett and Mara are nonetheless owed vast recognition for providing such rousing material worth capturing. The outward mode of performance is theatrical, with shrewd, minutely controlled gestures and tones of voice; beneath this, however, hums repressed passion, made by the grainy images to shudder into life. The artifice of the performances constructed on top of deeply felt emotion suggests the constant repression of Carol and Therése’s true love lives, having to keep so many secrets and conceal so much of what they feel.

In fact, just beneath every surface that appears on screen – brick walls, tar roads, snowy embankments, wooden doors, glass windows, fur coats, woollen blankets, soft and pale skin – throbs an insistent eroticism that Lachmann’s camera detects, though nearly always obscured, as eroticism of any type was at the time and particularly in the form in which it appears here. And these vivid and expressive images – the evocative grain, the saturated colours, the dramatic compositions – articulate Haynes’s own vision of romantic thrill and romantic anguish. It’s more than a mood or state of mind that is built up with the cinematic elements – including Carter Burwell’s score, which one has to believe is an overt reference to Philip Glass’s music for The Hours – but an artistic rendering of an idea, both of romance and of the cinema.

Highsmith evidently modelled the younger woman after herself, but in the film, though she shows a talent and an affinity for photography, Therése doesn’t exhibit the same force of creative impulse that Highsmith herself had. For that matter, other than her string of lesbian affairs, Carol is not so extraordinary a character herself. The wonder of their story and their lives, Haynes suggests, is not who they may be or what they may do, but what they feel for one another. Their love makes each extraordinary in the other’s eyes, and makes their lives worth telling in fiction. Their story is a marvel as every love story is, in movies and in real life.

The story of Carol and Therése’s love, however, is particularly special because of the special courage and strength required for them to live it, in the face of the nasty and cruelly stupid obstacles it faces. The prevailing laws and conventions, the circumstances in which they find themselves, turn their love into a brave act of assertion and defiance. And simultaneously, Haynes affirms his belief that the relationship between Carol and Therése, or between two men, should require no more bravery and vigour purely because of its homosexual nature than any heterosexual relationship.

As Haynes shows particular skill and vision in his use of the forms of classic in a love story set at the height of ’s oppressions and omissions, he also proves he is painfully aware of the injustices of the form’s past. In his creation of an astonishingly beautiful tale of romance, he also forges a brazen artistic statement of his vision of love and its wonder. 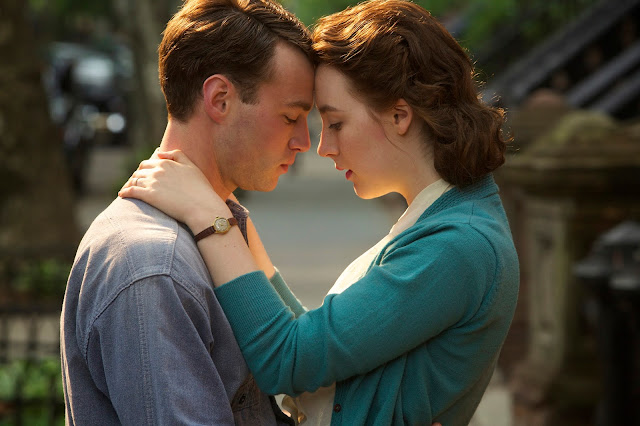 In stark contrast to the fierce expression of true emotion in Carol is the calm, cheery, neat and tidy , directed by John Crowley and adapted by Nick Hornby from the novel by Colm Tóibín. As the author’s nominative accents indicate, the action begins in , and is centred on men and women of that nation. Eilis Lacey (Saoirse Ronan) is a young lady working in a grocery store in Enniscorthy, which imagines as a place even quainter than it sounds. Its inhabitants are what press notes would call “simple people,” and and Hornby are no less condescending in their treatment of them. Bar her older sister, Rose (Fiona Glascott), a bookkeeper who helps Eilis look after their mother, all the townsfolk (as I believe they must be called, in their hobbit-like plainness), are small-minded and drearily naïve, both wary of and awestruck by anything from a world outside of Ireland, and all too neatly divided into the good and bad characters. One is surprised to find, for example, in each long shot in which she appears, that Rose’s feet are in fact touching the ground and not floating some short distance above it, as her only-just invisible halo might suggest.

Through a connection with a priest in (played by Jim Broadbent with his usual playfulness and light-hearted tenderness), Eilis is given the opportunity to move to and work in . She stays in a boarding house run by the conventionally tough but predictably kind-hearted Madge Kehoe (Julie Walters), in a neighbourhood full only, it seems, of Irish immigrants. Racked with the pain of homesickness, she begins work in a department store somewhat similar to the one that employs Therése Belivet (though, sadly, no lesbian enchantresses seem to come for her), but soon picks up when she becomes involved romantically with a young Italian plumber, Anthony “Tony” Fiorello (Emory Cohen).

The scenes between Ronan and Cohen are to what a small hill would be to the European lowlands – nothing much to speak of, but a climax of attraction and fascination in an otherwise flat or depressed topography. Eilis is, as a matter of fact and despite the obvious intelligence and radiant beauty of Ronan, rather a dull girl painted as a vision of solemn and graceful purity, without any fantasy, romance, or much ambition or desire to her. She dreams of becoming an accountant, and besides a brief and hushed moment of rolling across her duvet with Tony, her physical yearnings don’t seem much loftier. It’s Cohen who provides real charm and something like real feelings; he, too, isn’t given much to work with, but his winning smile, comically deliberate accent, and facial expressions of anguish in Eilis’s absence work to add some substance above the boundaries of the character laid out in Hornby’s script.

Although, however narrow his characters and bland his dialogue, Hornby proves himself a master of plot, with the melodramatic manoeuvrings rationally and lucidly leading us from one scene, one setting, one mood, to the next, finishing off with what is consequently a conclusion which, although it makes dramatic sense, is far less than emotionally satisfying. It entails a love triangle involving Jim Farrell (Domhnall Gleeson, fresh off the First Order’s Starkiller Base), whom Eilis meets on a trip back to visit her mother. Crowley and Hornby make sure to sketch in the contrasts between the worldly-wise and comparatively glamorous New Yorkers and the innocent and plain people of Enniscorthy, but the two cities and their residents are dishearteningly similar in the way that matters most: both are blank sets and faceless figurines on which the director has yet to work the magic of movies and the magic of life. Everything is clean, tidy, pretty, picturesque, sunny or rainy as required, and conveniently good-natured and cheerful for the art-house sensibilities the filmmakers would like exhibited in . We’re meant to be flattered in our obvious superiority to the pure and naïve people of the past, but I, for one, found this cloying vision to be more than sufficiently patronising, and far less than just to the wealth of history and breadth of experience that an immigrant tale like is meant to assume. After all, why go telling us of stories about seeing the big wide world if all that will be shown are the childish picture books of the nursery?