“Kalushi: The Story of Solomon Mahlangu” 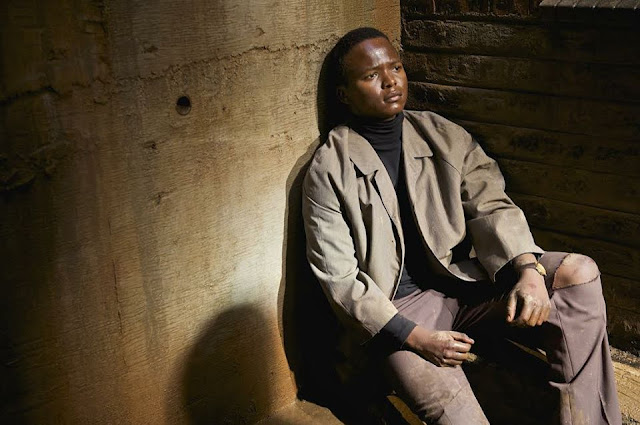 To see what other critics had to say about Kalushi, click here.

Kalushi: The Story of Solomon Mahlangu is the directorial début of Mandla Dube, who has previously worked as a cinematographer on short films and documentaries. It tracks the life of Mahlangu from his time as an ordinary resident of Mamelodi, beginning just before the protests of 16 June 1976, when he was nearly 20 years old, through his exile in Mozambique and Angola, his military training in the uMkhonto weSizwe camps, his return to South Africa to carry out MK guerilla operations, and his subsequent capture and trial, ending with his death by execution in 1979.

The story of Mahlangu’s life and death is an important piece in the history of the antiapartheid struggle, and, therefore, important in the history of South Africa in general. It’d be a valuable thing for all South Africans to know it, to understand the circumstances of it and how they contributed to the events, and to appreciate the full implications of it. Every individual I’ve heard from — and I agree entirely — has remarked on how urgent it is for us to learn and spread the stories of people like Mahlangu, stories which are at risk of being erased and forgotten, and stories that enlighten us by revealing the past and its people.

But a good and important story are by no means sufficient for a good and important film. The venerability of a work’s subject does not necessarily render the work venerable. It’s regrettable that we don’t learn more about South African history at school, and in much greater detail. I aver that schoolchildren will benefit from learning about MK martyrs and just what conditions and manoeuvres led to their deaths, as well as how strongly the legacy of those deaths still impact South African life. I also aver that we should not have to rely on feature films to educate us in these vital matters; I myself only learned the life story of Mahlangu when I heard there was to be a film on it and I looked it up online, and I’m sure most viewers will only learn of it when they see the film. This is woefully unfortunate, and it seems to me to beg the question: If we had all learned about Mahlangu and others like him while growing up and were better educated on the history of the antiapartheid struggle, would Dube’s film still be so widely accepted by audiences?


Kalushi is filmed using the methods and techniques we’re now accustomed to seeing on television, putting pride of place on the professional gloss of the film, as well as substituting grandstanding speeches and brisk exposition for lifelike speech and revelations of character. Dube shamelessly smacks blunt emotional markers right onto the screen and aims his entire film-making apparatus towards them; the weird editing techniques and clumsy score artificially stoke the audience’s emotions; the writing and performances can’t render the characters as anything more than inept ciphers that only utter dialogue to move the plot along or to state a thesis. Even the stately Gcina Mhlophe, who plays Mahlangu’s mother and who can carry herself with a grand pathos, bringing the aura of her graceful wisdom and bearing to her scenes, is given no room to evoke an actual human person. Thabo Rametsi isn’t so much given to play Mahlangu as he is to pose for shots of him reading various political tracts and delivering a few choice quotes in poorly set scenarios.

Dube ensures good quality from his director of photography, the American Tommy Maddox-Upshaw, who was on the camera crew for Straight Outta Compton. Which is to say, shots are well lit, and most of them could make handsome mounts on the wall of some conscientiously decorated bourgeois home. But photography that shows its professional pedigree is not the same as artistic photography, and a better film-maker would perhaps cast an opaque shadow across an otherwise constantly amber-lit face, or vary the lighting in a shot or in a scene to evoke a few of the myriad potentially deeper moods and dimensions. He may vary the camera placement or angles for heightened expression, or charge off at editor Craig Hayes’s frenetic pace for reasons other than to merely show the frenzied panic of a scene.

There are large gaps in Mahlangu’s life story, because it was not well documented and he left no writings behind. Bar a very rough sketch of life in the MK training camps, which also reveal pitiably little to the audience, these gaps persist in Dube’s film. While South Africans are most definitely better off for having learned about important historical figures, a film-maker must create the reason for them to watch their stories in his film, rather than, say, to read a magazine article or look them up in an encyclopedia on the subject. In the case of Solomon Mahlangu, the reason is simply that there aren’t any magazine articles or books on the subject, or at least there wouldn’t be if Dube hadn’t been making Kalushi. And that hardly counts as a standalone merit of the film. A better film-maker would imagine and depict the inner life of the struggle icon, and would give a proper sense of the unruly, human life that was actually lived and cruelly cut short.

I would like to have seen the manifestation of a modernist style and aesthetic sensibility in addition to Dube’s modern political attitudes. Nobody can fault him on his fervour in telling of Mahlangu’s life and death, and I can’t express anything other than sympathy with his rage at an immensely evil regime that both gave rise to Mahlangu’s actions and sought merciless retribution for them. It’s greatly admirable of him to want to educate viewers on the story, as well as inform them of the protraction of unjust apartheid-era laws into our own current political dispensation. But Dube gives no indication of what this story means to him personally, nor any reflection of his own presence, his own life, or his own ideas as they relate to Mahlangu’s. For all the merit there is to having local stories told by local artists, there is nothing in this film to suggest that it was made by a South African concerned with the history of the antiapartheid struggle. What we see could have been filmed by anyone from any country who had read the Wikipedia entry on Mahlangu’s life and had a good translator to give his or her lines in local languages.


Dube’s film was reportedly initially meant for television, and it plays as though it was filmed with that intention still in mind. It merely illustrates the known facts of the story without enlightening viewers on the apartheid regime, the fight against it, or Mahlangu himself. Dube flattens the story’s possibilities, without intensifying its meanings or underpinnings, whether moral, political, or personal. He neither fleshes out the vast and intricate inner activity of Mahlangu’s life, nor exults him into grand legend, though it would seem that Mahlangu deserved both. Kalushi works best as an unchallenging and uninspired enactment of a few historical scenes that would serve well in any history classroom in the country; it could take the place of a photographic textbook. Though I already did so just a few days ago, it’d be good to recall Viola Davis’s injunction once more to the gathered luminaries of Hollywood last month: “Exhume those stories.” Dube begins a disinterment, but there is much more here to unearth.