Think: a situation with a new malevolent dinosaur, even larger and more dangerous than the Tyrannosaurus Rex (like Jurassic Park III), but on the same island and with a similar - albeit much larger - commercial setup to the park in Jurassic Park, and with a feisty redhead female lead, just like Jurassic Park II. Also, Andy from Parks and Recreation takes on another dauntlessly heroic leading man role (so a type of Guardians of the Galaxy: Redux) and no character has learnt from the mistakes made by characters in any of the previous films (something like all of the Jaws sequels). The dialogue is mostly a signifier, and often redundant, sometimes even nonsensical (there're too many Michael Bay films to name here in comparison), but the action is often fun to watch - provided you remain emotionally detached from everyone and everything - and the vast and wanton destruction brought about seems a rather cynical move on the part of the filmmakers (Michael Bay again). Nick, of New Girl fame, tries to score with the female prison guard from Orange is the New Black, fails dismally, and is brutally emasculated by the bitchy Hilly from The Help. Stand by for sexless sexual frustration and cock-blocking (of a 16-year-old by his 12-year-old brother), and unromantic romance between the rugged dinosaur trainer and the cold and clinical corporate executive (basically all romantic comedies). There's nothing here you haven't seen, heard, or felt before, and nothing at all to stop you from partaking in the cultural (secular) sacrament of vaulting a vapid, stinted, and unimaginative commercial product to the cinematic event of the year.

For the General Movie-Goer

There are dinosaurs and they eat everyone.

The Sustained Silence in "Seun" 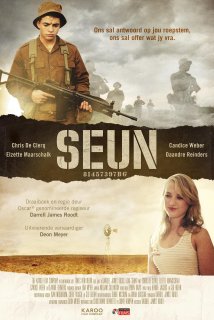 Seun is currently showing in theatres.

The new film by Darrell Roodt (who gave us Cry, the Beloved Country, Yesterday, and Jakhalsdans) takes as its subject the conscription of newly matriculated young men for the Bush War. At least, the recruitment of one matriculant (Deanre Reiners), in 1982. The boy’s name is Paul, and the film opens on his return home to his family’s farm in the from boarding school in . He returns to a doting, protective mother (Elzette Maarschalk), and a quietly proud, but emotionally distant father (Chris de Clerq). Also waiting for him is Annemarie (Candice Weber), a daughter of one of the local families, and ostensibly an old friend of Paul’s. We find that, while in front of their parents they’re polite and civil, the two are lovers (chaste, when we meet them), giggling over secret little notes and skinny-dipping together in the farm’s reservoir. They have only a few weeks together, however, before Paul must report for duty, sending him away to fight “those terrorists” for two years.

If, like me, you felt a small welcome shock at hearing of a movie about the South African conscripts (because not nearly enough literature or documentary on the topic exists), you are in for rather a disappointment in this film. If, again like me, you crave films that bravely take on an idea or a subject and artfully, stunningly bring about the realisation, the recognition, the heightening in your consciousness of that idea or subject, regardless of the setting and circumstances, you, too, should prepare yourself for discontent and regret here.
Read more »
No comments:
Labels: 2010s, 2015, Afrikaans, Darrel Roodt, South African
Newer Posts Older Posts Home
Subscribe to: Posts (Atom)