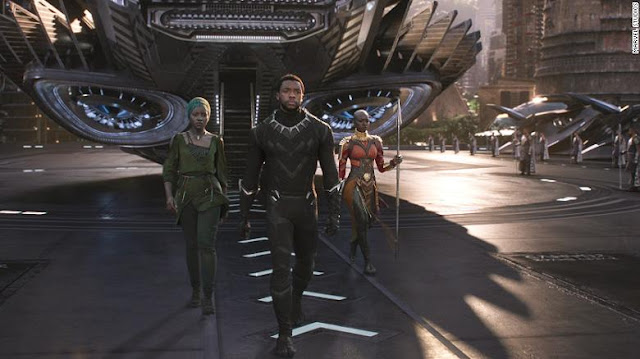 This post won’t focus very much on the significant cultural, sociological, or political aspects of the release and reception of the new Marvel film, Black Panther, which have been set out by a number of writers for other publications in South Africa (and, indeed, across the world). My position of privilege in this regard notwithstanding, I had my own reasons to be excited for the movie when I heard about it: Having seen Ryan Coogler’s previous film, Creed, I judge him to be one of the finest directors of his generation, and I was tremendously eager to see what he would do with the hundreds of millions of dollars that Disney was willing to give him — since other fine filmmakers, such as Peyton Reed and David Lowery, had done wonderful things with similar amounts, and I’m excited for Ava DuVernay’s upcoming A Wrinkle in Time for the same reason.

It’s no news to anyone who’s seen it — nor to anyone who’s heard from anyone who’s seen it — that just what Coogler did in fact do with it is something fantastic. I surmise that it’s particularly difficult for a director to make a strikingly personal work of art within the ultra-budget blockbuster strictures of a studio (and I have no idea whether having made two smaller works previously would make it any easier or more difficult), but Coogler has managed it, and offered up a terrific entertainment together with it.

Though South African moviegoers are now regrettably unable to see John Trengrove’s isiXhosa-language film Inxeba (perhaps even more so because of it), I’ve thought it worthwhile to collect local reviews of the film so that readers can get a broader view of the responses to it (I haven’t done the same with international reviews, since there’re already very good sites that do that).

Read The Back Row’s review of Inxeba here.

In her review on the Afrikaans culture site LitNet, Reney Warrington calls Inxeba “transformative,” and affirms her seriousness in that description:

With great care and respect, John Trengrove and his team disconnect you from your world, and walk alongside you into a world foreign to most. You are made to wince, to care deeply, even for loathsome characters, and, ultimately, you are left winded by the weight of the patriarchy and the tragic, yet perfect, end. The wide angles and close-ups, the lush landscape and cicadas buzzing, Xolani’s gentle soul versus Vija’s rage, the men singing and telling tales, the silences and cacophony all blend together in a perfectly balanced piece of art. The one element does not overshadow the other – the sign of a great film.

What adds gravitas to the film is Trengrove’s mode of storytelling, what he chose to show or not show. He could thrust patriarchy in your face. He could shock you with blood and guts and shattered bodies. That would be the easy way. Instead, he draws you in, shows you something beautiful and fragile and worth caring for, and then crushes it. It is a sucker punch of note.

If the primary worth of direction is to deliver, through images, a work and an experience beyond the dimensions of the script, then John Trengrove’s direction of the isiXhosa-language film Inxeba has significant merit, and is distinguished among South African films for that very reason. The writers — Malusi Bengu, Trengrove, and Thando Mgqolozana, from whose novel A Man Who is Not a Man the film was adapted — indeed supplied a deft and earnestly emotional script, but the final product is far from a mere illustration or fawning enactment; in my view, it’s a brazen, intimate, and personal film, marked with an invigorated visual imagination.

Read other review of Inxeba here.

Trengrove directs in tension with the script somewhat: Where the Xhosa writers (and actors, who surely contributed, if with nothing more than their resourcefulness and spontaneity on set) have something to say about their experiences of the Xhosa initiation camps and upbringing in Xhosa society in general, Trengrove’s priority is on the specific and universal dimensions of the central characters’ story. Though I’m not sure whether it can be called a love story, since true romantic love seems more or less absent from it to me, it has many of the same vectors of experience: illicit desire, sexual attraction, emotional dependence, repression, tenderness, contempt, rage, and the pained tensions of frustrated lives. Trengrove brings an open, forthright, and appreciative outsider’s view to the Xhosa customs he depicts, and films the central characters’ story through a prism of fully realised and keenly felt emotion. The result is a small and tightly wound world of inner and outer experience that threatens to unravel, as the story threatens the characters with the encroachment of outside forces and agents on their individual lives. 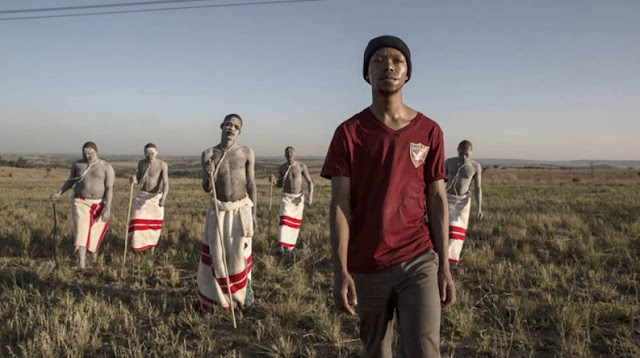 I hadn’t expected to begin my response to a new local film with more consternation against our state bodies and their interference in South African cinema, but the recent opprobrium of the Film and Publication Board’s ferociously unjust censorship of Inxeba has angered me in excess of my expectations. I wasn’t very much bothered by those protesting the film’s screenings in the Eastern Cape and Western Cape, though I was disappointed to find that theatre managers were caving in to intimidation — but the actions of the national classification and censorship authority were so cowardly, so unjust, and bore such harsh implications for the artists involved in the making of Inxeba as well as other South African artists that I cannot go without declaiming their repugnance here.

The Man and Boy Foundation (MBF) and the Congress of Traditional Leaders of South Africa (CONTRALESA) made an appeal to the Film and Publication Board (FPB) to change its rating of Inxeba with an age restriction of 16 to one of X18 — effectively a classification of the film as pornography. The FPB acquiesced and Inxeba, which was playing at multiplex and independent screening venues across the country, as well as reportedly having been bought by Multichoice to show on BoxOffice, Showmax, and M-Net, is now only allowed to be distributed by licenced pornography merchants and screened at designated “adult” venues. The only explanation that has been offered by the FPB so far comes along with its sudden announcement on its Twitter account, and it’s as repulsively evasive as the method of communication was brusque: