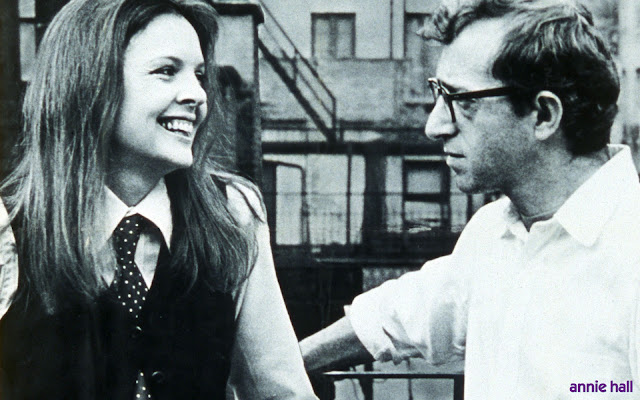 For Woody Allen, the Upper East Side of Manhattan could be Mount Olympus. Or, perhaps more aptly, the cultural centres of Classical Athens or Rome, overrun with artistic exhibition and discourse as well as with decadence, while the rest of America is the provinces of the empire, sunny and decent and undistinguished. Allen makes no effort to conceal his biases, and emphasises the distinction again and again in this sudden growth spurt in his filmmaking. His earlier films – of which I have only seen the 1972 vignette farce Everything You Always Wanted to Know About Sex* (*But Were Afraid to Ask) – were competent enough comedies, it seems, and, along with his stand-up acts, already established him nationally as a remarkable comedian, but with Annie Hall, his eighth film as director, he applied his wit and his satirical skills to a frame of new self-awareness. Annie Hall marks not only a surge in maturity – which is what youll generally find it being called by critics who reviewed it at the time – but also a great blossoming of modernity and grace. While Allen had literally filmed himself before, appearing in main roles in all of his previous films, he began here to film himself in another sense: to include his own experiences, enthusiasms, fantasies, complexes, sexual activities, and aspirations in his films. The change is marked from the first frame, with Allen addressing the camera and speaking to us, as if in a one-to-one stand-up performance, about his romantic past and relationship troubles.
Read more »
No comments:
Labels: 1970s, 1977, DVD Notes, Woody Allen

Notes: “A Room With a View” 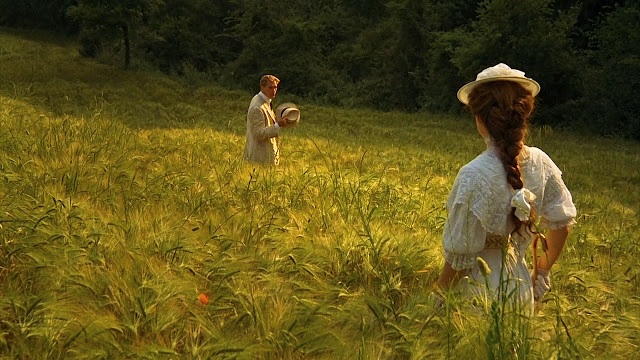 The initial problem facing any filmmaker wishing to adapt a novel for the screen is the problem of plot. Specifically, how much stays in, how much is thrown out, and how much can be added without looking unbearably arrogant? Many filmmakers have trouble with length: the Harry Potter books and novels of Dickens are far too long for direct transcription into a screenplay, and much decisive, and often painful, snipping away has to be done. What seems to work with a somewhat higher rate of success is adapting a shorter book, giving filmmakers room to expand and compound, rather than condense and simplify. Wes Anderson provides an ideal example with his Fantastic Mr Fox, taken from the tiny children’s book by Roald Dahl, as do David Fincher and Eric Roth with their grand adaptation of F. Scott Fitzgerald’s short story The Curious Case of Benjamin Button.

In their remarkably successful film version of E.M. Forster’s novel A Room With a View, which was released 30 years ago and has never really waned in popularity, the out director James Ivory, his long-term romantic and production partner producer Ismail Merchant, and writer Ruth Prawer Jhabvala take a path straight down the middle. They took a novel neither longer nor shorter than was required, and performed a kind of fundamentalist translation from page to screen. Forster begins, for example, Chapter 2 thus:

“It was pleasant to wake up in Florence, to open the eyes upon a bright bare room, with a floor of red tiles which look clean though they are not, with a painted ceiling whereon pink griffins and blue amorini sport in a forest of yellow violins and bassoons. It was pleasant, too, to fling wide the windows, pinching the fingers in unfamiliar fastenings, to lean out into sunshine with beautiful hills and trees and marble churches opposite, and, close below, the , gurgling against the embankment of the road.”

In the corresponding scene in the film, Ivory supplies a shot of Helena Bonham Carter as Lucy Honeychurch (the novel and film’s heroine) lying on her back in her hotel room’s bed, having just woken up, looking about the somewhat empty room. The look on Bonham Carter’s face suggests casual concentration, as if she is both reciting the passage to herself and remembering to show it in her facial expressions for the camera. She gets up and opens the windows wide, looks out upon the sunlit city across the , which is conscientiously included in the shot, upon the churches and, beyond them, the green hills.

The entire film is written and shot with that kind of devotional loyalty to the novel. Even the chapter headings are reproduced at the beginnings of scenes, with title cards appearing bearing text like “The Reverend Arthur Beebe, the Reverend Cuthbert Eager, Mr Emerson, Mr George Emerson, Miss Eleanor Lavish, Miss Charlotte Bartlett and Miss Lucy Honeychurch Drive Out in Carriages to See a View; Italians Drive Them”. The reason for it, I should think, is that Jhabvala, herself a celebrated novelist, knew very well what Forster was trying to achieve throughout, and out of respect for a colleague and his labours, she worked to replicate his efforts in the film’s screenplay. The result is that A Room With a View plays like a mere enactment, simply an audiovisual illustration of Forster’s novel with no imaginative feats or original images of its own.
Read more »
No comments:
Labels: 1980s, 1986, British, David Fincher, DVD Notes, James Ivory, Queer, Wes Anderson

The European Film Festival, which is a collection of European films currently playing at Ster Kinekor’s Cinema Nouveau theatres, is a useful enough opportunity for South African moviegoers to be exposed to the contemporary cinema of Europe, and an equally useful opportunity to find that the fact that something is foreign, subtitled, subdued in tone, or literary in temperament does not denote its artistic pedigree or intellectual superiority to our usual bright and brash, American English-language stock comedies and thrillers. What matters in cinema is less how composed and refined a film can be, and more how much life and with what depth and breadth of experience and ideas a filmmaker can imbue it.

On Friday, in a programme of our own devising, a friend and I went to see Woody Allen’s new film, starring Joaquin Phoenix and Emma Stone, named Irrational Man and taking on the breeziest and most enchantingly sun-lit tone, followed by Earl Grey tea and a screening of Flowers, a Spanish entry in the European Film Festival, in Basque and with English subtitles, and considerably more naturalistic and solemn. The sun lit the small Spanish town just as much as it did the small New England haven, but with far more organic, prosaic, and inert a glare.