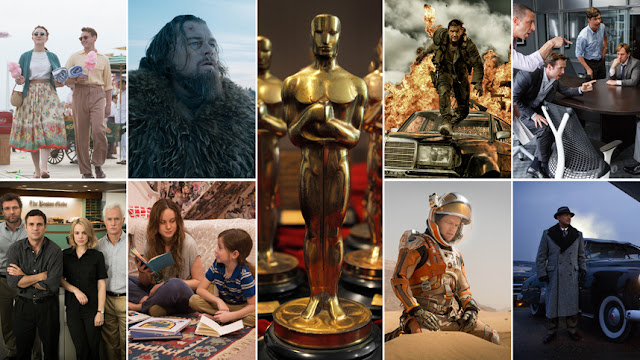 My general disaffection with the Academy of Motion Picture Arts and Sciences aside, it is always a pleasant gratification to play the game of predicting the Oscar winners. I’ve not yet come across any betting pool to take part in and make money off my predictions (or lose it), but I’m willing to take bets from any readers who think they may have a better handle on the odds or decision-making logic than I do. True, you’ve seen enough articles in newspapers and on your Facebook newfeeds laying out the probable choices – not to mention that my own post is going up at the latest possible moment – and one wouldn’t think it’d be particularly difficult for anyone to predict winners as I do now. Notwithstanding, I’m still eager to make a few last-minute calls, and, after all, it’s not my fault everyone else seems so intensely interested in the silly business. Bored entertainment journalists are entirely free to publish yet another article on how this year is “Leonardo’s year,” and on how he deserves this Oscar more than anyone else has ever deserved anything; but – as I reminded a group of unsuspecting shoppers yesterday morning while reading just such an article in yesterday’s Beeld in Pick ’n Pay – you and I, dear reader, are just as free to shout out angry expletives when a journalist does so.

This year’s batch of nominees is particularly dismaying, with not a single daring work of artistic excitement among of the seven best picture nominees I’ve seen (I have yet to see Room, and will hold out on commenting on it, hoping that it may be the one contender to get behind). In recent years, the Academy has indeed nominated a few magnificent films (The Wolf of Wall Street, The Grand Budapest Hotel, The Tree of Life, Hugo, The Social Network), along with a handful of excellent ones (Selma, 12 Years a Slave, The Descendants, Midnight in Paris, Black Swan) and the idiosyncratic works (Inception, War Horse, Lincoln, Her, Boyhood etc.); but this year offers pitiably little to stand up for. With frontrunners like The Revenant, Mad Max, and Spotlight, one resigns oneself to a season of glum, pious head-nodding at the winner’s solemn proselytising, and chest-swelling pride at the winning films’ social “victories,” which – oddly – no one seems eager to note are all pretty easy positions to take up years or decades after the true radicals, visionaries, and champions have cleared the path and tarred the road. 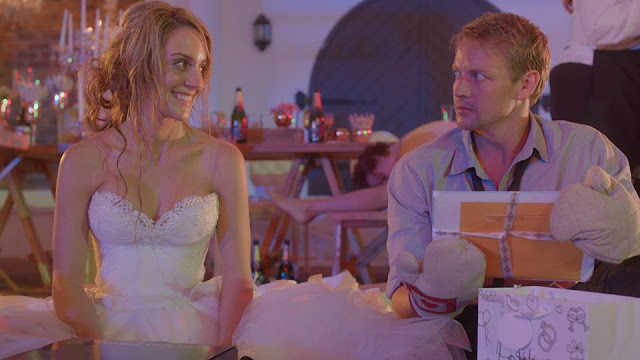 Audiences may wonder what relation Ivan Botha and Donnalee Roberts’s new film, Vir Altyd (“Forever”), bears to the last one, Pad na jou Hart (“Road to Your Heart”) (both directed by Jaco Smit). The characters and settings are new (don’t expect to have escaped the Cape since the last one, though), but one senses more than a few links between the two works. They’re easy enough to track down: we’re still securely in romantic comedy/travelogue territory; the two stars are again a reluctant couple, adamant not to fall for one another despite being scantily clad together on a tropical island; and, most regrettably, the film is still beset with the impedimenta of hipsterism. The opening shots are of neatly picked, pastel-hued proteas in copper pots, yellowed maps and photographs, vintage cameras, and a shiny VW Beetle, all accompanied by the folk-rock yelps of Mumford & Sons. In short, having travelled down the road to her heart, Botha must now devise a plan to keep it with him – for always.

The chief difference between the two films is the artistic accomplishment realised by the filmmakers. In both movies, audiences are attracted to and won over by the charming lead actors, the artificially sweetened script they recite from, the bucketfuls of sunshine and quaint natural scenery in which they find themselves immersed, and the inevitability and virtue of their romance. With the characters of Pad na jou Hart, however, we’re never given more than a handsome smile and the obvious discontent it so pitifully hides. The characters are pretty faces trying to conceal a sore spot, and once those bruises are bared and soothed, there’s nothing more to them as people. Hugo and Nina, however – the young couple at the centre of Vir Altyd – while uttering dialogue (given to them by the actors who play them) no more distinguished nor gripping than their precursors did, are bestowed by the cast’s performances with a little more life, and implications of broader experiences and deeper emotions.
Read more »
1 comment:
Labels: 2010s, 2016, Afrikaans, Jaco Smit, South African 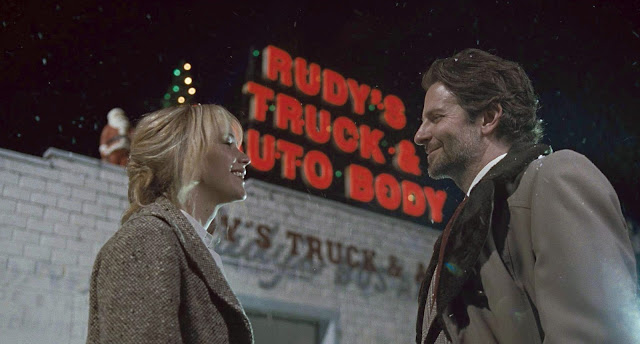 In 1991 Joy Mangano sold her first commercial design, the Miracle Mop, through infomercials on the home shopping network QVC. In 1994 David O. Russell released his first commercial feature film, Spanking the Monkey. The initial experience of a work is hardly ever meant to be an allegorical reading – even Orwell intended for readers to enjoy Animal Farm first as a story about talking barnyard creatures, and only afterwards as an allegory for Stalinist Russia – but after seeing (and, one hopes, immensely enjoying) Joy, the new film by Russell based on the life of Mangano, viewers can very easily fill in for themselves the connections and parallels between the life and experiences of Mangano that Russell depicts, and the ones he himself underwent around the same time. And it works only to make the entire endeavour even more rewarding.

Joy stars Jennifer Lawrence as Joy Mangano, and though I have no idea whether she fits the bills of appearance and manner for the real-life woman, such considerations are secondary to the exhilarating dramatic and emotional intensity that she imparts in the role. It seems to be the performance that has unintentionally been training for, for years. She arrives in the film bearing the tenacity and self-reliance of Katniss Everdeen, the emotional precariousness (such as she then could muster) of Tiffany Maxwell, the unfuckwithable-ness of Rosalyn Rosenfeld, and the slight air of a superior and detached shape-shifting mutant. She adds to this everything else she’s learned, both in her private and her public life, inside and out of fictional roles, and is guided by Russell towards the most full-bodied, challenging, and exultant work she’s ever given. But, after all, she’s playing the character which, I suspect, lies closest to her writer-director’s heart.
Read more »
No comments:
Labels: 2010s, 2016, David O. Russell, Tom McCarthy

Impressions on the Oscar Nominations

The Oscars are a bore. Any awards are, naturally, but the Oscars in particular because – despite entirely fair recent criticism of them as out of touch – millions of people around the world, and most people in the American film industry still take them and their decisions all too seriously. I should think that the description of a performance or a script as “Oscar worthy” is really a slur, given the artistic calibre of what usually gets nominated and awarded, but hack critics belch out the phrase as if shouting for encores. But one shouldn’t be too surprised, because the Academy of Motion Picture Arts and Sciences always amazingly finds itself to be in complete accord with critical consensus, and what gets labelled as Oscar worthy is generally officially stamped and packed just so, which gives some clue as to how much our of our annoyance with the Academy is attributable to either the unanimity-seeking critical community, or the industry’s enslavement to their opinions.

The Oscar choices represent what Hollywood would like to think of itself, and what it would like us to think of it. A quick flip through the nominees of each year can give a good impression of what’s on the industry’s mind, and where it likes to picture itself standing on some or other issue. What can always be relied upon at the Oscars is that message is a far stronger factor in success than artistry, and ostensible political correctness or moral decency is far preferable to relevance or entertainment. One can discern that this year, for instance, Hollywood and its journalistic myrmidons applaud filmmakers for venerating a lawyer who upholds the US Constitution; for blessing us with the sweet, good-natured story of an upper-lower-middle immigrant who finds happiness in America; for deciding for itself that action pictures with female leads may be entertaining and commercially viable after all; for enthralling us with the wonders of technology and human innovation, to the exclusion of humanity and its own wonders; for chastising greedy and fraudulent financiers and traders who profited massively from their millions of customers’ losses and got away with it; for inflicting pain and discomfort on major stars in the interest of so-called realism and authenticity; and for censuring the Roman Catholic Church for sheltering child rapists. In short, it doesn’t exactly go out on an ethical or intellectual limb, and the aesthetics of its choices can always be trusted to match this moral timidity.

Blood and Guts and a Bore 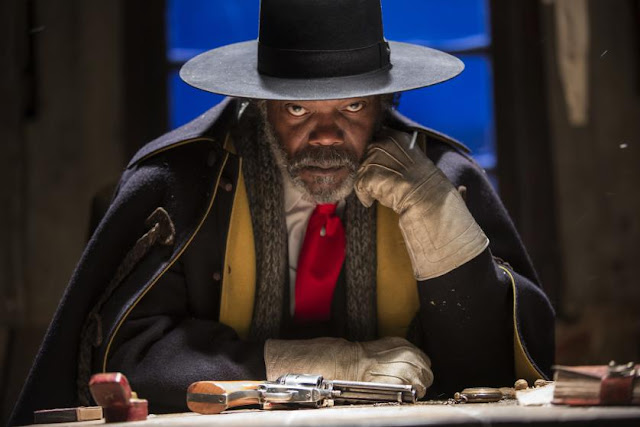 Quentin Tarantino’s previous film, Django Unchained, starred Jamie Foxx as the freed slave Django and the antebellum Deep South as the chains. His new film, The Hateful Eight – announced in the opening credits as his eighth – takes place in the postbellum West, but otherwise is a neat reprise of the previous film. There is a white bounty hunter, his black associate (a delectable performance by Samuel L. Jackson), and the same looseness of history coursing through a profusely wordy script. Characters wind their ways through seemingly endless threads of dialogue, only to blow each other apart in a blood-drenched apocalypse. Like the unchaining of Django, it’s the kind of feature one either very much relishes or reviles.

Since the dawn of his career, Tarantino has invited us to watch his films not as visions of reality, but as illustrations of ideas that coalesce into a worldview. In The Hateful Eight, he has gathered together all the elements of a classic murder mystery and, as usual, he strings them out and gleefully stirs them together in a slow-cooking stew. But, rather than deal it out as it comes to the boil, he blows it up and delights in the spray of blood and organs over his guests.
Read more »
No comments:
Labels: 2010s, 2015, Quentin Tarantino
Newer Posts Older Posts Home
Subscribe to: Posts (Atom)