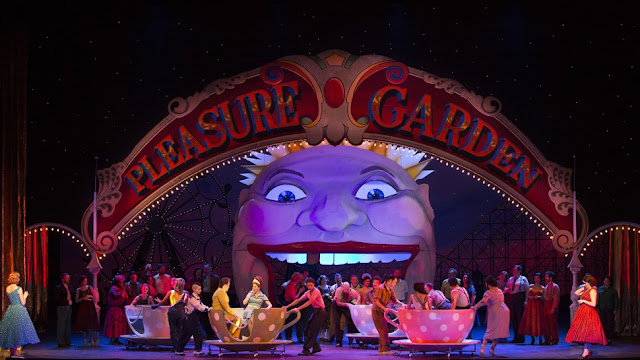 The Metropolitan Opera’s 2017-18 season is close to its end, and there are only three productions left to be seen broadcast in South African cinemas. The first, Così fan tutte, by Mozart, in a new production by the British director Phelim McDermott, had its first screening on Saturday evening; the other two, Verdi’s Luisa Miller and Massenet’s Cendrillon, will both begin in May. (The Met has already announced its productions to be broadcast in the 2018-19 season; you can read about them here.) Così fan tutte, Mozart’s final collaboration with the eminent librettist Lorenzo Da Ponte, poses a number of heady puzzles to the director of any production of it and, now that I know the opera (that is, the score and libretto) myself, I’ve found it fantastically interesting to check clips of different productions on YouTube to see how the directors have managed their way around and through them. How to understand Mozart and Da Ponte’s attitudes to the piece? Is it a thoroughly cynical, bitterly pragmatic view of romance? Is it a benevolent yet worldly approach to sexual politics? Is Mozart ascending to the loftiest of ironies, or descending to the most rooted and human sympathies, when he sets the sextet of characters’ sordid frolics to some of the most beautiful music written for the stage? And is a harsh moral judgement being passed on any or all of the young lovers, or is the opera a show of deep and tender fellow-feeling with each of them? A director faces the epitomic conundrums of opera stagings, which only become larger and more difficult as times change and audiences develop.

McDermott has chosen a grand concept to envelop his production and scoop these problems right out of the way. He’s set it on Coney Island, in New York, in a carnival setting, during the 1950s or early 60s, at the threshold of America’s sexual revolution. The colourful sets and costumes and splendidly enchanting lighting of the whole show are pleasures to see, and the outflux onto the stage of one clever idea after another is delightful, even if the total cumulative effect is less of a joy than a pleasing diversion. He has cleverly enlisted actual Coney Island sideshow performers as his background (non-singing) cast, and they appear in most scenes, embellishing the settings around the lovers’ arias, or listening with a detached satisfaction to Don Alfonso’s asides, like Oberon’s fairies. I’d heartily recommend that fans of Mozart operas go see one of the remaining shows of the production (check the Ster Kinekor website for details), warning that joyless reactionaries are likely not to have as good a time as the rest of us. 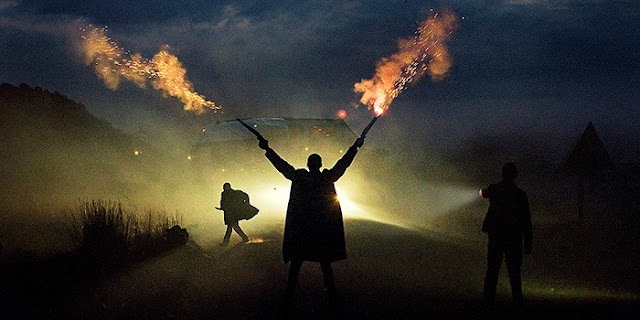 Michael Matthews’s first feature film, the Sesotho-language Five Fingers for Marseilles, written by Sean Drummond, has been marketed everywhere with maximum ostentation as South Africa’s very first western, and, reflecting on the experience of watching it, that fact bodes well for the future of South African cinema: Other attempts at the genre have nowhere to go from here but up. The film is a hefty haul of all-too-familiar features that have come to characterise what I think of as our country’s prestige cinema: the movies meant to show off and advance our slowly developing film industry, but that, to me, throw its limits and shortcomings into sharp relief. These features include an ostensibly detailed attention to quality photography, a plot thrown together from local television and international blockbuster clichés, an elision of personal and idiosyncratic style for the sake of specious substance, dialogue of the most hackneyed and unimaginative variety (in whatever language is chosen), a conspicuous absence of directorial presence or artistic personae, a dismayingly narrowed and uniformly professional attitude to performance, a totally conventional notion of drama, a view of character and method of drawing characters that is both blunt and shallow, and the lack of detailed attention to milieu or specific setting.

Read others’ reviews of Five Fingers for Marseilles here.

The weak drama unfolds the plot doggedly, without accumulating details or views of anything on show, whether the setting, the characters, the broad contexts of the story, or the ideas meant to be introduced to it. Does it matter which small town was chosen as the location of the fictitious Marseilles? Would it have been any different if it had been filmed at any one of the many dozens of other small towns surrounded by dry landscapes across the country? Is there anything at all that this specific location offered to the filmmakers’ vision? If so, it isn’t to be seen in their film. If not, should it not then be used to springboard more general ideas about the country at large? I didn’t come across these, either. The script introduces elements without developing them any further than the first subordinating conjunction of a basic character sketch or plot synopsis, without tightening the emotional tensions of the film, and without mapping out a perspective or context for it. Avoiding spoilers, the resolution of the drama renders pretty much all of what came before inconsequential and insignificant. It wastes the resources of a hard-working cast of dedicated actors, who fixed their grim facial expressions in place for the entirety of the shoot, as well as the location scouts who went to great lengths to find the appropriately harsh and windswept natural settings.
Read more »
No comments:
Labels: 2018, Michael Matthews, Sesotho, South African

A new Sesotho-language South Africa film, Five Fingers for Marseilles, opens today in local theatres. Much has been made on social media about the fact that it’s a western, updated and translated to a contemporary South African context, and it’s been sufficiently hyped by pundits and publicists to draw the attention of South African moviegoers. Here’s hoping for significant commercial successes.

Read The Back Row’s review of Five Fingers for Marseilles here.

Nikita Coetzee reviewed Five Fingers for Marseilles for the entertainment site Channel24, awarding it four stars out of five, and writing that she

struggled to imagine what a South African western would look like — in my mind picturing clichés like tumbleweeds, cowboy boots, and a sheriff who makes it known that he is in charger around these parts. Thankfully, I found none of that. The creators of this film did a fantastic job taking what many expect a western to be, and flipping it on its head. While there were still many elements of the classic western film, Five Fingers for Marseilles is so uniquely South African that midway through I stopped looking for the things that made it a western, and started looking out for the things that made it a good film.

That being said, if breathtaking cinematography is what you’re after, then this movie is definitely for you. Filmed in the Eastern Cape, it boasts beautiful visuals that are enough to keep the eyes of someone with a short attention span like myself entertained. In fact, had it not been for the amazing imagery, I may have found myself staring at my watch a few times as the slow pace of the film caused my mind to wander every now and again.