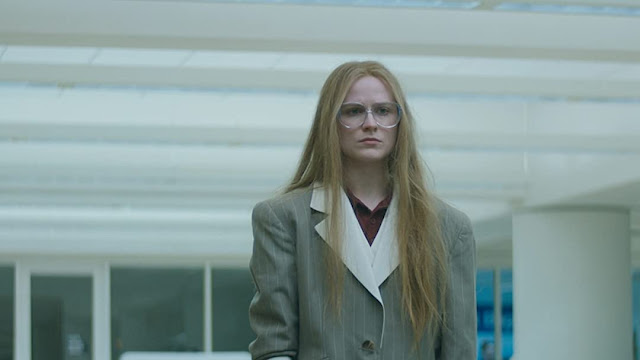 Miranda July’s new movie – her third feature film – tells of a family of scammers: a father, Robert (Richard Jenkins), mother, Theresa (Debra Winger), and their 26-year-old daughter, Old Dolio (Evan Rachel Wood), whom they’ve brought up outside of the mainstream culture and trained as a partner in crime. The very origin of Old Dolio’s name is an anecdote that exemplifies July’s enormous, distinctive, and highly eloquent imaginative powers. She also works as a short story writer, performance artist, and digital media artist (among a few other positions), and her filmmaking overflows with the creative energy she imparts in every aspect: the performances, the camera angles and movements, the light and shadows, the plot, the dialogue, the soundtrack, the very transitions from each image and sound to the next, all build upon each other to render every moment a stunning creation of imagination and furious expression in itself. Surrealism is combined with idiosyncratic fantasy to evoke vast emotional turmoil; the natural world’s turbulence, seismology, and cosmos map onto the inner world and experiences of both the characters and the artist that imagined them.

The subject of Kajillionaire is family life, and, in particular, the friction and conflict that arises when a family that has isolated itself comes crashing into contact with the outside world. Old Dolio’s parents treat her without affection or due respect, justifying it as an egalitarian attitude – they claim regard her as an equal partner, while casting numerous cruel offhand remarks – and, without knowing it, she harbours an ocean of repressed emotions and desires. Her journey of self-discovery, self-revelation, and emotional eruption begins when the family meets an optician’s assistant, Melanie (Gina Rodriguez). Robert and Theresa lure Melanie into a scheme with feigned warmth and affection (the same false emotions they claim to keep from Old Dolio), and even their faux behaviour arouses jealousy and anguished yearning in Old Dolio. Melanie befriends Old Dolio and guides her through a new realm of emotional expression and nourishing gratification, that not only frees her from the repressive restrictions of her own family, but brings her into contact and connection with the wider world, that awakens her to the might and magic of living a connected life. July comes up with one of her most extraordinary imaginative strokes in rendering this moment, both as a cosmic-scale emotional experience and visual metaphor, of a person emerging from dark nothingness into the light.

A word on availability: Kajillionaire was released theatrically in the US earlier this year, and is available on various streaming services in the US, but nowhere in South Africa. Local viewers will need to devise their own schemes to see it.