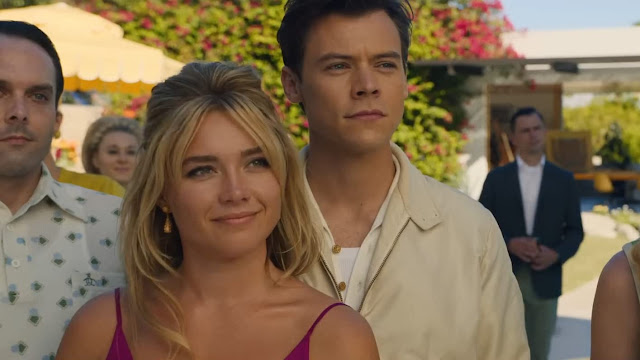 I’ve just come back from seeing Olivia Wilde’s new movie, Don’t Worry Darling, and I’m very excited to report that it was a terrific undertaking. I’ve seen many reports from people who found the movie unoriginal, dull, and insubstantial – and they’re entitled to those views – but my own experience was very, very different. From what I had heard, I was expecting a retread of The Stepford Wives, but from the movie’s first moments, it emerges as a keenly observed, deeply emotional, fiercely engaging work. And Wilde is shown to be a strong and distinctive director, one who can focus her assembled cast and crew not only into the absorbing endeavour of finely crafted storytelling, but into a unified artistic vision, a white-hot worldview presented visually.
If you’re interested in watching the movie fresh, perhaps you should stop reading here and go see it, because a lot of the thrill comes from the unfolding of the plot (though I won’t give away any details here). The setting of the movie is the microcosm of the wide world that is traditionally seen as the modern man’s lorded realm; namely, the household and the picture-perfect family that resides there. Like Ira Levin before her, Wilde has selected the insular and isolated suburban American neighbourhood of the 1950s as its quintessential representation – it’s the archetype of nuclear families with half-deified heads, as well as of women’s repressed individuality. It’s almost like Wilde has put a visual form of voiceover over her movie, to say, there’s a reason the mid-century feminist movement broke out in places that looked just as idyllic as this.
Read more »
No comments:

Movies to Watch on Netflix

This post is simply a list of movies that I like, that have been made available on Netflix, and that I hope more people find, watch, and enjoy.
From the time that I started drafting this post until I got it ready to publish, I saw that a number of my selected movies have been removed from Netflix. I decided to keep them on this list, in case you’d like to seek them out elsewhere.
Let me know if there’s anything I’ve missed that should be recommended to other readers. 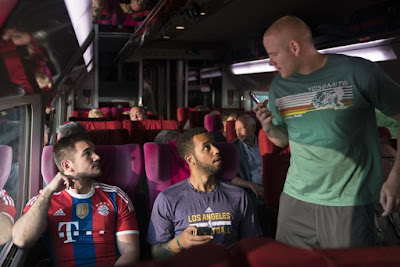 The 15:17 to Paris (Clint Eastwood, 2018). Three young men (two in the US army, one their schoolfriend) stopped a terrorist attack on a train ride to Paris in 2015. In this spare yet enraptured re-telling, Eastwood casts the men (none of whom are professional actors) as themselves, making for a strange and wholly memorable vision of latter-day heroism. 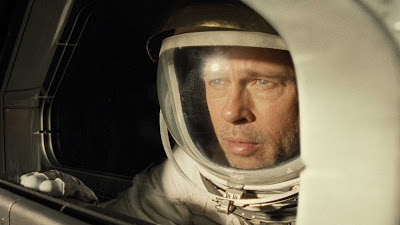 Ad Astra (James Gray, 2019). Brad Pitt plays an astronaut in the late 21st century, searching for his long-lost space-exploring father (Tommy Lee Jones), and averting disaster for Earth. This Heart of Darkness adaptation is especially moving and memorable for the subjective depths it penetrates. (Read my blog post about it here.)
Read more »
No comments:
Labels: Streaming Notes

Two Joyful Weeks at the JPO

Reading a concert programme can give a concertgoer an advance impression of the kind of experience they might undergo. A little knowledge on the works programmed, of the soloist, and of the conductor can go a long way – and previous experience of each can go much further. But they can only go so far. No concert can be heard in advance, no feelings can be felt before they arise. And the foretold experience of a concert is a slender mirage that melts away as soon as the first real notes are played.

Take, for example, the first concert of the Johannesburg Philharmonic Orchestra’s Winter Symphony Season. I read, first, that the young Venezuelan flautist Joidy Blanco would be the soloist, playing Mozart’s Second Flute Concerto (K. 314), and that the conductor Robert Moody would then direct the JPO in Beethoven’s Seventh Symphony. The whole endeavour would be kicked off by Mozart’s overture to Cosi fan tutte. I read, second, that Blanco would be replaced at the last minute (due to travel complications) by Liesl Stoltz, the highly accomplished South African soloist whom we have been fortunate enough to hear at the JPO before, and that Stoltz would be replacing Blanco’s scheduled encore with a virtuosic showcase of her own choice.

Knowing what I know about Stoltz, Moody, Mozart, and Beethoven, I quickly drew up some ideas of how the evening would go. There would be some difficulty in the orchestra (as there invariably is on opening night) keeping precisely in sync for the Mozart. Stoltz would play decorously, and would dazzle in her encore. The Beethoven would roll out with inevitable boisterousness, just as it has a hundred times before, and would linger (uninvited) in my head for the rest of the week. (The Beethoven was last played by the JPO just eighteen short months ago.) I also harboured the quiet hope that Moody – a cheerful American southerner – would address us before taking the podium for the Beethoven, as he had done so memorably at his JPO début in 2019, conducting Brahms’s Third Symphony.

Well, the JPO has released the “new” line-up for its Winter Symphony Season, and it invites concertgoers to a challenging game of spot-the-difference with any previous season. Actually, a more apt challenge would be to put the new programme next to one drawn up by a prudish and dowdy old spinster 100 years ago, and then guess which is which.
Okay, Rachmaninov's Fourth Piano Concerto was written only 96 years ago. The difference is that the spinster – enamoured of Rachmaninov as everyone always has been – would have cheerfully programmed the brand-new piece; the JPO can only love a composer when he himself (rarely she) is entirely de-composed. In my 5 years of attending JPO concerts as a dedicated subscriber, I have only heard about 30 minutes of music written by people still living; that’s about 1% of the music performed by the orchestra.
Read more »
No comments:
Labels: Music
Newer Posts Older Posts Home
Subscribe to: Posts (Atom)