2016 was not an excellent year for this blog. It’s not because I didn’t see many movies that I loved – on the contrary, I saw some of the greatest movies of my life, and a fair volume of them – but, due to a growing number of more pressing priorities, my duties on The Back Row were neglected, and I didn’t get the chance to share those elated experiences here.

Just about everyone else on the planet has already released their round-ups of 2016, and I’ve had a look at each of the movie pundits’ choices for the top films of the year. The results have fortified my conviction that the best thing for cinematic tastes to be is unruly and uninhibited. What one first notices looking through these lists is that many films are being hailed in London and New York that we haven’t had the faintest whiff of yet in South Africa; this is just a distribution and scheduling discrepancy. But what one notices next is that, besides a few differences in ranking and an oddball choice here and there, pundits and mainstream media critics are making all the same choices for their favourite films, and those choices converge closer and closer each year. One is led to believe that many critics are just as susceptible to hype as mass audiences are, only their hype is generated at film festivals and press conferences, instead of being stoked by trailers and supplementary merchandising.

What struck me while I surveyed these consensus choices on the masses of lists and polls (which I’ve compiled for you at the bottom of this post) is that the objects of this hype so rarely align with what I would consider commendable artistic achievements. Few lists contain more than a single film that I loved, and many don’t contain even one. It’s not a huge surprise to me; I read the reviews of my favourite movies throughout the year as I saw them, and saw quite quickly that the movies in which one viewer locates rapture and daring, many others find only confusion and obscurity. What I consider the greatest film of 2016 – Terrence Malick’s Hollywood reverie Knight of Cups – was designated “rotten” on the website Rotten Tomatoes (as useless a cultural phenomenon as any website could be) with a score of 45%, and Woody Allen’s crime comedy Irrational Man scored 44%. In terms of mainstream movie releases, not many people went to see either of those two films, and not many that did loved them. This in itself doesn’t discourage me – Malick and Allen have long been working in ways that don’t rely on commercial success and critical adulation, and their careers will continue without hindrance – but it is dismaying to see how many people think a movie must be good just because of the number and stations of others who say that it is. True appreciation of the cinema, just as success in the various realms of one’s life, depends on your capacity for imagination and independence of thought. 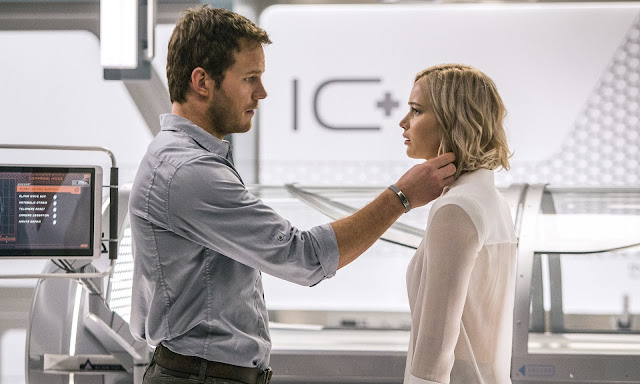 Having been introduced to 2016’s sci-fi scene with Dennis Villeneuve’s Arrival – a shamelessly manipulative, undistinguished rumination on how we should think beyond our paradigms, and work peacefully together towards common ends – and having seen only The Imitation Game from the same director – which I found to be both pretty dull and grossly prejudicial and narrow-minded – I dreaded Morten Tyldum’s next film, Passengers, set in space in the near future and starring Hollywood leads Jennifer Lawrence and Chris Pratt. I can now report that dread is not the appropriate or required response to the film; however, nor are relief, elation, wonder, applause, thrill, or just plain pleasure. Passengers is more interesting than Arrival: the sentimentality is hard earned, rather than cheap, and the melodrama has a solid base, rather than being base itself. But the main event of the plot – i.e., the action that sets off the questions of who did what to whom and why, of which the trailer offers no hints, and which I won’t be giving away here – and the ethics it entails are so repellent that it’s difficult to imagine any serious endorsement of the film, despite its few merits and strengths.

Tyldum shows himself here to be a master of technical film-making; every scene – every shot, in fact – works perfectly to illustrate the progression of the narrative, the frames of mind of the characters, the implications of the action, the stakes and risks of the choices at hand, and the time and place of each moment within the setting of the film. Pratt and Lawrence hit their emotional markers like bull’s-eyes, rendering the emotional state of their characters with maximum clarity, and precisely marking the characters’ turns within a scene from one emotion to the next as the plot points are reached and developed. Michael Sheen, who plays a bar-tending robot of advanced artificial intelligence, manages an uncanny blend of calculated humanistic warmth and calibrated casualness in delivering lines that were ingeniously devised by the film-makers as just what a bar-tender that runs on gears and algorithms would say to a customer. The script, by Jon Spaihts, is painstakingly designed to withhold and reveal information at just the right moments, to effectively and efficiently envelop you in the characters’ backgrounds, and to move the plot at paces alternating between coherently brisk and romantically deliberate. The angles and editing give well conceived and full views of the action in each scene: what goes where, what’s coming towards whom, what the imminent dangers are, and how everything is positioned in relation to everything else. I was reminded of 2015’s popular action film Mad Max: Fury Road, so rationally and coherently filmed that you could plot a detailed map from the consecutive shots.