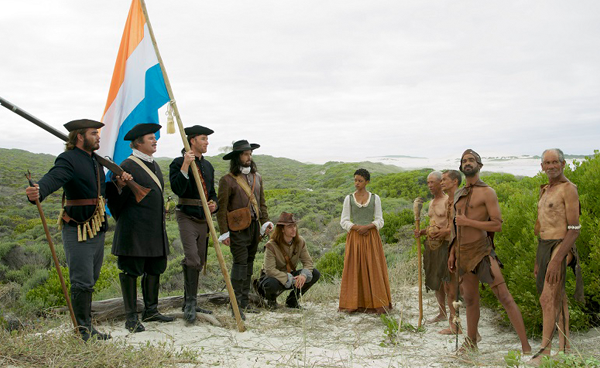 Having finally seen Roberta Durrant’s hyped biopic Krotoa, about the Khoi woman who lived among the Dutch settlers of Jan Van Riebeeck’s Cape Colony as a mediator and translator, it’s difficult for me to believe that the film was made by a morally and artistically serious person — even less so by a woman who purports to be serious about discussing the historical treatment of women. It’d be boorish for me to use such words as “atrocious” or “abominable,” the staples for describing films one finds particularly distasteful, in the face of a story of actual historical atrocities and moral abominations, but I find that Durrant may well care less than I do about treating the subject with respect and good sense. The failures of her film are manifold, and arise from critical malfunctions on a range of levels of the film’s development.

(To read what other critics had to say about the film, click here.)

Most immediately apparent are the many failures of execution: Durrant and her director of photography, Greg Heimann, insist on eliminating any sense of personal or critical perspective on the shots they film, offering the blandest, most clichéd establishing shots of a beach, a fort, and the waves breaking on the west coast, and focusing squarely on actors’ faces during conversation, to the exclusion of all setting, context, and visual nuance, and with no consideration for meaningful framing, compositions, lighting, movement, or depth (except, perhaps, in what Durrant must consider the evocation of a painting, in the vulgar love scene between Krotoa and the Danish doctor Pieter Van Meerhof, and in the stunningly indelicate allusion to the famous painting of Van Riebeeck’s arrival in the Cape); Durrant and her cast refuse to step out of the woefully constrained soap-opera style of acting they learned on South African television and from pedestrian South African film productions, emphasising their exasperatingly simplistic emotions with a dependence on hackneyed expressions, and suffocating any hope for spontaneity and freedom in their performances; Durrant urges her composer, Murray Anderson, to churn the most prosaic emotional reactions with a vapid and overbearing score that treads all the wrong steps at all the wrong moments; Durrant and her costumers and makeup artists devise to present all the actors as awkwardly and obviously out of place as possible in what were probably the thoroughly-researched but ill-refashioned looks of the day.


As apparent to moviegoers are the failures that arose even before the film reached execution, i.e., those of the script, whisked up by Margaret Goldsmid and Kaye Williams, and still accepted and taken up by the obviously poorly advised Durrant. Perhaps there’s an editor or two to blame as well for the fact that there is no perceptible progression of thought, emotion, story, experience, or ideas from one scene to another, or even within a scene, from one line to the next. The Khoi characters speak an indigenous Khoi language to one another — which the actors learned specifically for the film, and it shows — while the Dutch characters speak Afrikaans to one another, with the two Khoi translators Krotoa and Autshumao switching for the context and auditor; but, inexplicably, Khoi characters will switch between their own language and Afrikaans a number of times in a conversation, zipping from line to line in one language and the other. Was the will to present an indigenous Khoi language in the film so weak that it couldn’t be upheld for entire conversations? Other than to fit in with the insipid and prosaic mode of the rest of the film, is there a reason for choosing the most basic, most pedestrian, flattest, and most uninteresting form of contemporary Afrikaans to be spoken by the Dutch settlers? If not to recognise the historical import of the arrival of the Dutch in the Cape — for Europe as much as for Africa — could a more formal and distinguished form of language not have served as a point of cultural distinction? And why exactly is it that not an iota of effort was given to write a scene or a conversation following natural contours of disclosure and concealment, rather than the characters’ consistently bluff outbursts of exposition and frank emotional declarations? Is it a sign of ineptitude, or insult, from writers who don’t think we could understand anything that isn’t slowly and loudly spelled out for us?

Beneath these outward failures, however, are the far more distasteful failures of the film’s conception. In interviews, Durrant has said that Krotoa was deliberately released during Women’s Month to begin conversations, and that the inevitable controversy of the film was intentional, to spark debates around issues such as land ownership and cultural identity. What, exactly, Durrant meant to contribute to the conversation for Women’s Month with the depiction of a horrifying sexual assault followed by a shockingly complacent propriety by both the victim and the disgustingly contrite offender, is well beyond me. Does Durrant think that quietly serene forgiveness is an adequate substitute for justice to a rape survivor? Does she think that sincere affection is a sufficient ethical buffer for the violence of rape? Durrant gives up all responsibility in this discussion — she has done her work in portraying something repellent; thinking about it is your job. She further debases her source material by presenting Krotoa as the decent mediator between two factions of pettily whining children. The Dutch have arrived and stolen the Khoi’s land, livelihoods, and access to necessary resources, but the Khoi stole some cows — what Durrant considers an equivalence of wrongdoing is resolved by the compromises of the level-headed Krotoa, who gently scolds the Khoi and matches the Dutch in slippery dealings. The Dutch are either angels who guard Krotoa or demons who lie in wait for her downfall, except when Van Riebeeck is reduced to a snivelling rapist creep. The Khoi are petulant juveniles who act up when they don’t get their way. And Krotoa is caught between the two as the only sensible person on the continent. Yet, as her position changes, Durrant offers only more opportunities for exasperation and confusion. Are we to understand that Krotoa turned into an alcoholic literally overnight, when the new Governor Wagenaer removes her from a single conversation? Has Durrant never seen an alcoholic before, or is she so inept a director that even the filming of pouring and drinking is an awkward task to complete? When Krotoa wails at the end about the savage evils of the Dutch settlers, are these the cries of disillusionment or the rantings of a drunkard?

Durrant doesn’t show much regard for any cultural history (of either the Khoi or the Dutch) nor the topics of land ownership and cultural identity — again the thinking is yours to do. All she seems prepared to provide is the mention of the issues’ names, while discussion rages on platforms surrounding her and her film’s publicity. There’s enough talk in which the Dutch are accused of stealing the land, but talk that could as easily be delivered on the radio or a television talk show. Why burden our movie screens with it if nothing of visual interest is to be added? As for cultural identity, there is a moment early on during which Krotoa dances in a prison cell on Robben Island and the moon appears to enlarge and diminish, which seemed promising for an interesting view of the emotional and spiritual distinctions of the Khoi people, but absolutely nothing comes of it — instead of exploring new areas of knowledge and experience, Durrant merely discovers new modes of banality. Is there anything she sees, discovers, evokes, or elicits in this film that could not have been seen, discovered, evoked, or elicited by any other able-bodied person with a camera? It’s just fine for an artist to want all viewers of her work to bring their own perspectives, reactions, ideas, and points of discussion, but the very least required of her is to offer her own. If an objective reportorial conversation-starter were what was desired, a magazine or newspaper column would have served Durrant much better, and would not have involved such a large team of talented resources to waste. The failures of Durrant’s Krotoa means to me that the entire story is still available as material for cinematic adaptation, and I await the next eager filmmaker’s trial of it with anxious anticipation.

Note (13 August 2017): I watched an interview this morning with the French director Jean-Luc Godard, from 1972, in which he comments on the paradoxes and difficulties of making movies about heretofore exploited, oppressed, or repressed groups of people. He makes a number of fascinating and insightful points that I think would have served Durrant well in her conception of Krotoa. I include the video below, for your consideration.