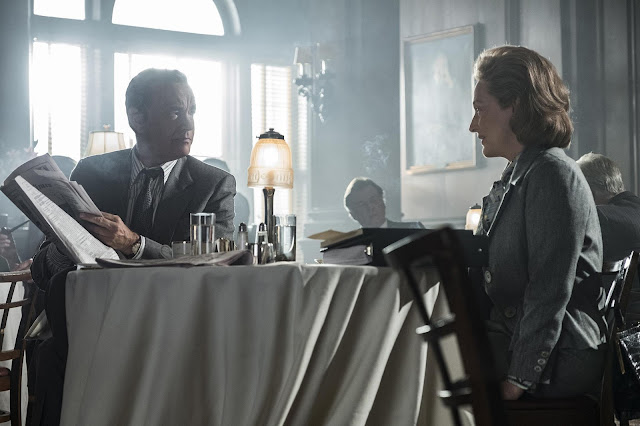 Steven Spielberg’s new film The Post slots neatly into the establishment it purports to monitor, in a routine that belies the processes of journalistic inquiry it supposedly commends. It’s loved by critics, who are, after all, journalists themselves, and who appreciate too readily an assured and accomplished approval of the system. The System in the story is the American presidency, in particular the administrations of Truman, Eisenhower, Kennedy, Johnson, and Nixon; the System within which the story is presented is that of the very hub of Hollywood industry. Spielberg’s style is cultivated from the mechanised forms and procedures of the studio era of movie-making; his methods are faithful to the conventions of the industry; he himself, together with the stars of the film, Tom Hanks and Meryl Streep, represents the core of its establishment; the story itself points to the ostensibly great deed of the head individual of a commercial and political system of its own, who is part of nothing if not of the élite of privilege and power in American society.

Spielberg’s film centres on Katharine Graham’s (Streep) decision to publish reporting on the classified Pentagon Papers in the newspaper her family owned, The Washington Post. Hanks is the headstrong and hardy editor who organises the investigation and reporting, and pushes strongly to publish. Richard Nixon steps in as the villain; his actual recordings from the Oval Office are used on the soundtrack (an actor named Curzon Dobell provides Nixon’s silhouette), and manipulated to cast Nixon in his own archetypal role. The exaggerations and fictions of the film’s plot are obviously formulated to directly connect the story to a comment on the Trump administration and commonplaces about the press’s role in relation to it.

“The Shape of Water” is a Hollywood Classic With Contemporary Politics 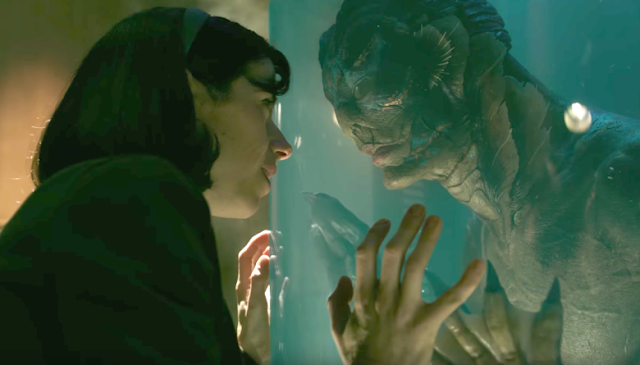 The experience of watching Guillermo del Toro’s new film The Shape of Water is like that of buying and eating an elaborately manufactured and fussily packaged epicurean dessert, the kind that upmarket department stores promote in their northern-suburbs branches over Christmas. The lavish presentation may resemble that of haute cuisine, but the formula conforms to industry staples and packs heady dosages of sugar and fat, for immediate gratification and easy consumption.

That comparison is somewhat unfair: Del Toro’s film involved many conscientious craftsmen and many hours of labour, and even the most pedestrian of Hollywood studio productions deal in narrative and concepts, human emotions and ideas — the stuff of which Woolworths doesn’t generally construct its weekly food catalogues. And del Toro knows how to mix in ideas with his sweetener; the only other of his films that I’ve seen is Pan’s Labyrinth (and about half an hour of Hellboy II: The Golden Army), which ran its narrative course through a prismatic view of fascism as well as the full gamut of psychoanalytical insights on childhood fantasies.

Though Pan’s Labyrinth is the film that took a stark view of particular brutalities during the Spanish Civil War and The Shape of Water is the one that centres on a fairytale romance between a dewy-eyed innocent and a colourful water creature, it’s the former which played as an ingenuous Freudian expedition through the preoccupations of childhood, while The Shape of Water has the feel of a more tempered and more adult look at things.
Read more »
No comments:
Labels: 2010s, 2017, Guillermo del Toro, Sign Language

“A Quiet Passion” is the Great Biopic Emily Dickinson Deserves 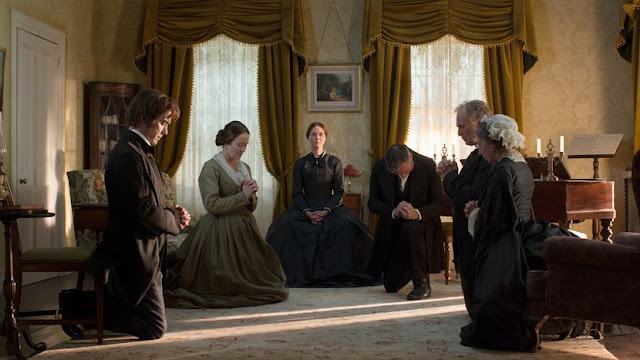 Emily Dickinson is my favourite poet apart from Shakespeare, and, in my estimation, also happens to be the greatest poet beside Shakespeare. The differences between the Bard and the Belle of Amherst are multitudinous and immense, but they are connected in how I see each of them by two common traits: a Herculean, colossal cognitive struggle with (and, in some ways, triumph over) the cosmos, which marks the distinct originality and greatness of their poetry; and the shockingly (yet, somehow, aptly) minute amount we know of each of their outer lives, as well as the regrettable absence of a chronicle of their monumental inner lives. The character of Shakespeare has already been featured in a small handful of films, sometimes not totally in earnest, but Terence Davies’s assuredly masterful and astoundingly emotional biopic A Quiet Passion features the first appearance of Dickinson on the screen. And, as befits the greatest poet of her continent and one of the greatest in the language, the film is an exquisite and unforgettable masterpiece that — I note bitterly as awards season is underway — has not received the recognition it certainly merits. If it had been released in theatres in South Africa last year, I may well have placed it right at the top of my list of favourite films of the year.

I have only seen one other film by Davies, his first, Distant Voices, Still Lives, from 1988. If that film and this one, his latest, are anything to go by, he is undoubtedly one of the great artists of the time, and has also been unduly neglected and forgotten in the popular media. I had at least hoped we would hear of some or other Best Actress nomination for Cynthia Nixon, who plays Emily Dickinson in the film, and in doing so gives one of the most intense and insightful biopic performances in recent years; alas, the film has been unjustly sidelined. Yet, as frustrating as this may be for those who worked on it, this suits the story of the determined artist who craved acknowledgement and vindication and never got it while she was alive.

Charlie Chaplin’s “The Circus” at 90 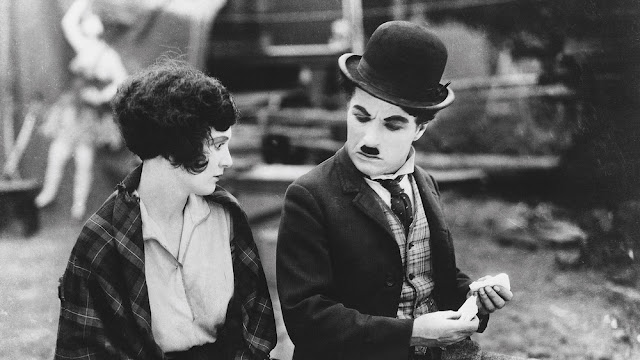 This article originally appeared on the Big Screen Hooligans website and is reposted here with permission.

Over two issues in 1963 and 1964, the French film monthly Cahiers du cinéma printed a dictionary of American filmmakers. Jean-Luc Godard, one of its contributors and now one of the legendary directors of the French New Wave, submitted the entry on Charlie Chaplin, writing,

He is beyond praise because he is the greatest of all. What else can one say? … Charles Spencer Chaplin, while remaining marginal to the rest of cinema, ended up by filling this margin with more things (what other word can one use: ideas, gags, intelligence, honour, beauty, movement?) than all the other directors together have put into the whole book.

Over a career spanning more than 75 years, Chaplin directed at least 82 films, starring in nearly all of them, including eleven feature-length films which stand among the greatest in the art form. It’s out of nothing other than deep affection and warm admiration that we note today is the 90th anniversary of the release of one of those features, The Circus, which premiered on 6 January, 1928, at the Strand Theatre in Times Square, New York City. It’s famous as a particularly difficult production to complete in early Hollywood history, and one of the most fraught times in Chaplin’s career. Film equipment troubles, personal legal troubles, personal financial troubles, and family grief ended up stalling production for ten months. This is a movie blog, but a calendar year in movies (an arbitrary divisor used for ease of comparison) can always be contrasted with, and, more often, related to the calendar year in general. In 2014, we noted a new rise in protest and resistance action around the world, spearheaded by the Black Lives Matter movement that began in America in that year. At the end of 2014, Ava DuVernay’s magnificent biopic Selma was released, which not only depicted a subject similar to the issues concerning the movement, but reflected a similar temper of outraged defiance and dignified opposition. The film was duly lauded, in both apt aesthetic and trite journalistic terms, and had a moderate showing at the Oscars. But, other than distilling and sharply appreciating the substance of the matter at hand, it did nothing to aid any of the protest movements surrounding it. Movies can’t change the world — art in the general shouldn’t try — but artists aim for its greater truths and meanings.

At the end of 2015, in my movie round-up, I noted the mounting energies of resistance and opposition both locally and globally: the student funding crisis, the South African education crisis, the international refugee crisis, the climate change crisis, fanaticist terror attacks, rising movements of fascism and overt racism, a growing distrust in an increasingly consumerist global media industry, and widening gaps of inequality. 2016 — whose political concerns were not enumerated on my blog post to end off that year — seemed to many like a tipping point in many of these issues, and the fierce observation and commentary on movie releases since then by social media users around the world has directly taken them into account. More explicitly than ever (and helpfully emphasised by the Oscar envelope mix-up), the widespread recognition of Barry Jenkins’s Moonlight over narrower, more backward-facing works was political at least as much as it was aesthetic. This year, Hollywood was the epicentre of an eye-widening and heartening blowback against the systematic abuse of working women. Some of the allegations of sexual misconduct arising from Hollywood were shocking (though many were sickeningly unsurprising), but nothing about the predators’ actions was special or exceptional. These difficulties exist and thrive in every industry, and it’s almost necessary that an industry that exists to reflect and perceive the society at large is the one that exposed so ubiquitous a problem.