What to See This Weekend: The Struggle 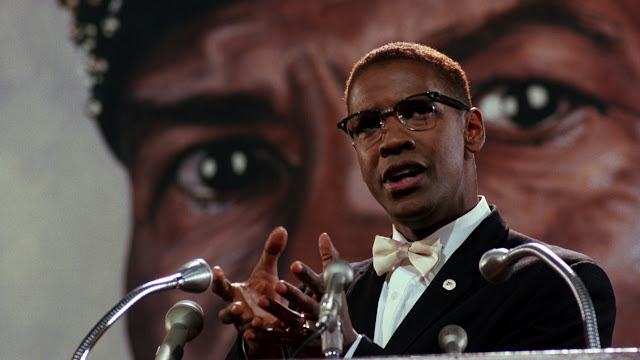 Available on iTunes; on DVD.

Spike Lee’s biopic of the civil rights activist and Muslim minister Malcolm X is based in large part on his autobiography. I noted on this blog that James Baldwin had written an earlier treatment of Malcolm X’s life for film, which was developed into the screenplay for Lee’s film. Having never read the autobiography nor Baldwin’s treatment (nor the versions in between that and the final script), I couldn’t say how much of the film comes from either source. Nor could I say, now having seen the film, how much of the stuff of the film itself comes from Spike Lee and his actual thoughts, feelings, and artistic impulses, and how much comes from what Spike Lee thought ought to be one’s thoughts, feelings, and heavily wrought artistic representations of these. Malcolm X displays an undeniable cinematic artistry, but only in flashes; although the film may seem like it’s set out like a textbook, or pseudo-testimony, and made not out of a drive for artistic creation but an assertive, unambiguous, even peremptory account of Malcolm X’s life and work, Lee’s distinctive style works to keep his film falling into the deadening craters of other Oscarisable biopics (think of Gandhi, Shine, Out of Africa, A Beautiful Mind, The Imitation Game, and the rest).

Lee seems determined to include as much of Malcolm X’s life as his distributors would allow in the film; many episodes are enacted in what feels like their real-time full length. The comparison between this and another, far greater recent biopic is striking: in his movie about Emily Dickinson, A Quiet Passion, Terence Davies keeps his telling elliptical, choosing a few distinctive moments — some of them even partly or mostly fictional — in Dickinson’s life in the foreground to suggest a rich and multiplicitous background. Of course, Lee couldn’t have done the same here, because of the very real cultural and political risks in leaving too much of Malcolm X’s story to interpretation, or even of refracting it too sharply through one’s own interpretation. Unfortunately, however, this ostensibly faithful account occludes a probing, questioning, curious, ambivalent, ambiguous, or polysemous attitude to the content, and so precludes a highly nuanced or inflected filming of it. And, in an oblique way, it works against Lee’s intentions: when an artist resorts to hard assertions, especially in an apparent effort to set the record straight, and especially in a form derived from and assimilating to fiction, it’s particularly difficult to trust in its veracity, even (or, perhaps, especially) when it’s demonstrated that the narrative is mostly fact-based. The facts don’t speak for themselves, and an artist is in store for deep pitfalls when he presumes that they might. 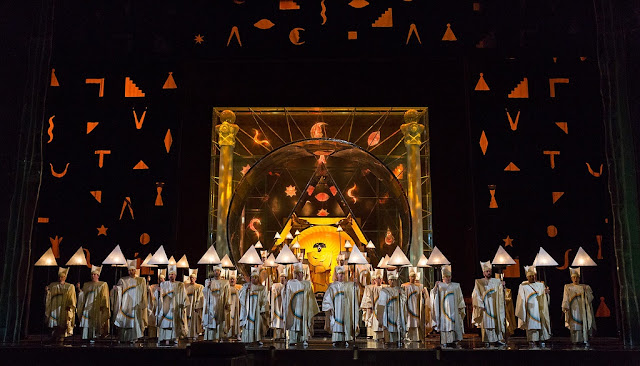 The Metropolitan Opera in New York City broadcasts a few of its performances each season to cinemas around the globe, for those of us interested in the annual productions of one of the largest and greatest houses in the world and for whom the local operatic slate is not nearly sufficient. Ster Kinekor screens these performances in South Africa (in its Cinema Nouveau theatres, in Pretoria, Johannesburg, Durban, and Cape Town). The 2017-2018 season started off with a dramatically dark production of Norma, starring the Canadian soprano Sondra Radvanovsky as a truly great interpreter of the Gaulish priestess and a glowing Joyce DiDonato as her apprentice. The second production on offer is a revival of Julie Taymor’s perennially popular production of Mozart’s Die Zauberflöte (“The Magic Flute”). Mozart’s momentous opera soared for over two centuries before Taymor got her hands on it — and I daresay it’ll outlive her brilliant work — but it loses nothing to her outlandish and variegated designs and devices, and I most heartily advise every reader of this blog to go out and see one or more of the final screenings of this production (see the Ster Kinekor website for details).

Mozart’s music has had to weather more overblown yet rhapsodic rhetoric than any other composer’s in the modern era (and the classical and ancient times, for that matter), but it’s difficult to find anything like a hyperbole among its descriptors. Best known as a child prodigy (and now a virtual fertiliser for the ears and minds of today’s children, in the hope that his freakish abilities are infectious), Mozart’s technical mastery and fertile prolificity are incontrovertible, but they’re only the first part of the story of his genius. It’d be true to say of him, as a composer and teacher friend of mine has, that, in all 700 works, in the face of many self-imposed challenges, he never set a single note in the wrong place or at the wrong time; every moment is composed (you’ll forgive the cliché) as if by divine configuration. And that heavenly order is a true and personal aspect of his art: More than mere phenomena of sensation and spectacle, Mozart’s works constitute a noble and exalted philosophy sought sublimely through sound.

Making Your Way, for Free

My apologies to readers who have come, as I hope you might have, to expect something from this blog’s weekend viewing recommendations that you wouldn’t find on just any old entertainment blog available to you. Last weekend, instead of a selection of films for you to seek out, I posted about a few sites and platforms where you can discover your own viewing paths and make your own selections of films to see and report back on. (I’ve received a few stories and recommendations from some readers on specific series they’ve found and enjoyed, but not heard anything about their feature film — or short film, for that matter — delights.)

The sites I gave were pretty obvious and very broadly mainstream, and no doubt already known in their entirety to most readers: Showmax, BoxOffice, iTunes, Google Play, and Netflix. They are also either subscription or rental/purchase services. The delightful array of South African independent productions on Showmax and foreign independent productions on Netflix aside, what about the works for those viewers who are looking for alternatives to the common feature viewing fare? And what about those viewers whose budget constraints preclude extensive viewing on sites that require you to pay for your pleasures?

I must admit that I myself am nearly as engulfed by the darkness of ignorance as any reader asking those questions. I know of pitifully few places where you can go to watch things for free — but, of course, at least one reason for that is that not many distributors are committed to releasing their films for free — and I know even less about alternative viewing that would interest some of you. All I can do here is point out to you the tiny handful of things I do know, and plead for more of you to let me know about the options that they know of so that I can inform more readers of what’s available to them. (I’ll only let you know about the legally permissible options here; viewers who disregard laws and copyrights do so at their own inconvenience.)

The Allegories Packed Into “mother!” 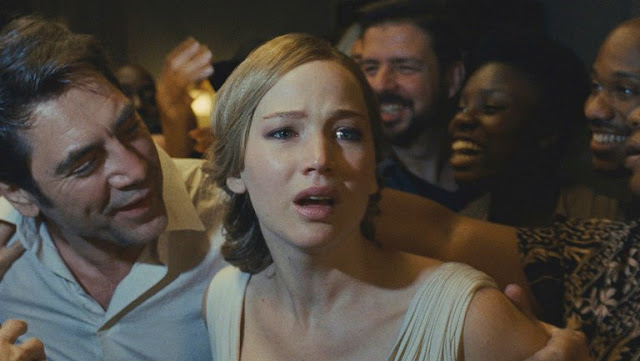 Note: I’ve done my best not to spoil the plot or the effects of the film in any way, but readers who wish to retain the full jolt of surprise when they see the film should defer reading this post until after they’ve done so.

There are two literal mothers presented in the story of Darren Aronofsky’s latest film to which the title may refer; however, unsure as you may be of a whole multitude of things after seeing the film, it’s strikingly clear that Aronofsky has not concerned himself with the literal. The tumbling, nightmarish torrent of jump scares, hysterics, and eventual gore congeals, by starkly exploitative means, into even more ironic a horror film than this year’s brilliantly aware satire Get Out. That irony arises from Aronofsky’s strong allegorical purposes in making mother!, but just what he has presented an allegory of is the problem with which many viewers have found themselves burdened. (Or not. Aronofsky’s irony is sometimes so systematically laid into the film’s fabric, held so consistently right before the viewer’s face — just as the steadicam is before Jennifer Lawrence’s for most of the film — that some reviewers missed it entirely.)

The story of cyclical abuse and dependence could be taken for a number of political narratives of the moment. Exploitation and unwelcome presences are always easy targets for an exegesis on the evils of colonialism; specific incidents in the plot and the overtly sexualised view of the young and delicate woman at the centre resonate against the last few weeks’ resounding headlines of exposed sexual misconduct and the ubiquitous abuses of power they constitute; it could be read as a nerve-shredding depiction of what it’s like to try and lead a calm and sheltered life with someone who craves, and is eventually granted, celebrity in a media-sodden culture; Herman Eloff, in his review for Channel24, sees it as a critique of the unguarded openness and unchecked desires that our electronic and connective lives allow us to indulge; Aronofsky himself reportedly claims a parallel with “the rape and torture of Mother Earth” (in Lawrence’s words), which explains the title, and which is how I initially viewed the allegory, with the house as an analogue for Earth, and the increasingly aggressive characters representing us in our careless exploitation of natural resources. The problem is compounded by explicit allusions to Biblical paradigms and Aronofsky’s characteristically frenziedly subjective depictions.

What to See This Weekend: Make Your Way

This weekend, instead of giving my recommendations of all the films you could look out for, I’m pointing out the directions in which you can undertake your own viewing expeditions. For all the downsides of technological advancement, the global and transnational connectivity and accessibility it has supplied is one of the greatest of its advantages. There are now more movies available to you than ever before, even after the growth over decades of television screenings and home video distribution; the problem now is to sort through the myriad of newly handy offerings to properly allocate your resources (chiefly, those of your time and your money) to those that you think you could gain the most from. Readers of this blog will know that I believe there is far more than mere entertainment to be gained from a good movie, and I find the hour-and-a-half spent watching The Darjeeling Limited or Good Time plus the two hours afterwards spent discussing it with your companions are well worth the energies and assets you’ll have invested in finding them, getting yourself to the right place to see them, and paying to see the screening.

Obviously, as before, the preferred option of many who wish to see a film at home over the weekend is to watch in on DVD. The range of films available is vast (though not as broad as many of us would like) and the options for where to get it are very widely varied. Nobody needs me to tell them that renting is cheaper nor that owning yields far greater returns (and I aim to own as many of my favourite films on DVD as possible, which offer inordinate value in repeat viewings and social screenings with various groups of friends). Most of you won’t need to be told where to go to get them, either (and may have better knowledge than mine on where to buy cheaper secondhand copies or where to rent), but I’ve found online stores such as Takealot and Loot to be competitively priced and to have the thankfully much wider range of products available (through international third-party sellers) than what you are able to find on shelves. For those conscious of bargains and price disparities, the site Price Check compares the price of a product offered by different sellers, including these online stores.