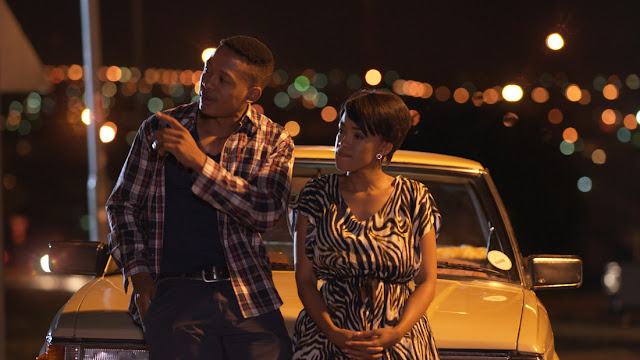 One will have noticed a new candour and delight regarding life’s amatory pursuits at the cinema this week. It is, however, unfortunate for South Africans that this carnal interest should be taken up on their screens when daytime thermometer readings in Gauteng drop to 20°C – well below what is considered acceptable in Pretoria, and certainly not the kinds of temperature at which young men and women are itching to cast off their clothing. The two films that opened on Friday, the 3rd of June, that are so keen on the tactile particulars of love seem to have only that in common, though; their differences are vast and the diversity of cinema seems just as healthy nowadays as its sexual drive.

The first of the two is a new South African romcom (the other is Luca Guadagnino’s A Bigger Splash, but more about it later), starring Dineo Moeketsi (from e.tv’s Scandal) as the shrew Gugu who was abandoned on her honeymoon by a ratbag husband and left to settle, by way of menial labour, his massive hotel bill. The script of Mrs Right Guy, by Pusetso Thibedi and Cati Weinek, runs us through the usual complaints of men only wanting one thing from a woman, and women wanting everything else from a man. Gugu feels that dating is being forced to choose between compromising herself and alienating all romantic prospects. It’s a sorry state, in short, and Gugu only exacerbates matters as she tears into the men who hit on her in the street, and swings at the hopefuls making eyes at her best friend, Anna (Thando Thabethe). Enter the decent and strapping Joe (Lehasa Moloi), a chicken farmer and neighbour who helps Gugu by repairing her car, and the polished and cocksure Dumile (Thapelo Mokoena), the new boss at the advertising firm where Gugu and Anna work. The discerning reader knows where this script is headed, and could also plot fairly accurately the route it’ll take to get there without any further description from me.

The geography of this route is through various Johannesburg milieux: Gugu and Anna meet Joe at the Neighbourgoods Market in town, where he sells his chickens; Gugu ends up in Dumile’s luxurious apartment overlooking the Nelson Mandela Bridge one evening after work; and Gugu and Joe spend much time discussing the modest chicken-selling business he runs in their home township outside the city. Comparisons to this year’s earlier box office hit Happiness is a Four-Letter Word are inevitable, not least in the two works’ showcasing of Johannesburg, and I feel that Mrs Right Guy fares rather favourably in this comparison. The director, Adze Ugah, is a Nigerian who nonetheless displays an affection for his adopted home, eGoli. But what brings an even more refreshing pleasure into the film is the supple changes in language in the characters’ dialogue, forming part of the growing acknowledgement in South African entertainment that a flourishing pluralism and multiculturalism in our society and its art that we desire depends so much on the devotion of resources to broadening the use of home languages. A true South African cinema can’t get by on English and Afrikaans alone, nor even on the prevalence of films in a single language. I don’t know how many languages are spoken in the film (speaking only English and Afrikaans myself), nor even really why I was so struck by the changes and their nimbleness as I was, but it felt encouraging, and it runs through the film like the fruity raisons and seeds in Ouma’s rusks. (Mrs Right Guy is predominantly in English, and when it isn’t, there are English subtitles.)

The problems with Mrs Right Guy are chiefly in the script, and secondly in Ugah’s direction. Conventional plots and conventional story setups are no problem in themselves, and can work just as marvellously as a brazen leap of literary innovation if the director applies a distinctive personal style of visual expression and cinematic invention to it. Mrs Right Guy, however, is beset with an unoriginal, overused story and an impassive visual style – the chronicailment of South African cinema. I wrote of the aesthetic emptiness of Happiness is a Four-Letter Word, due to a lack of artistic vision, though mitigated by the talented performers. The same is to be said for Mrs Right Guy, as well as noting encouraging signs of improvement. As I observed that Vir Altyd was an artistic improvement on Pad Na Jou Hart, I note that Mrs Right Guy starts at the standard provided by Happiness is a Four-Letter Word and steps forward from there. The actors here are just as talented and the dialogue just as bland, yet Ugah seems more willing, perhaps also more appropriately skilled, to engage with his performers and locate some kind of absorbing spontaneity, or revealing idiosyncrasy while glazing over their line readings.

A resort to unfunny penis punchlines as a dramatic rejoinder is regrettable, but fortunately it’s not the mark of the healthy sex drive I spoke of. The exhibition appears during the night in Dumile’s swanky high rise apartment; he, having plied Gugu sufficiently with red wine, proceeds to plough, and we get quick cutaway shots of the two of them – covered completely from view by large sheets, but by no means inhibited – zealously alternating between formations of the beast with two backs, the critter with one back and a weirdly shaped middle, and the being with legs splayed in the air and hands tightly gripping the sides of the mattress. I was quite pleasantly surprised to see all of this, as well as hear the discussion of it the morning afterwards (the incessant blandness of the dialogue notwithstanding); outside of Apatovia, few Hollywood romcoms are at all willing to regale us with the raptures of the bedroom and the consequent uneasy ambivalence the following morning. For all the talk of Hollywood leading the world into vice and sin, its mainstream often shows distinct strains of tactful prudishness. To find in a South African film a merit noticeably absent in many American productions is something of a warm gratification. (And yes, Happiness is a Four-Letter Word does indeed also show more skin than the average American romcom.)

South African cinema is undergoing a renaissance. Every film journalist in the country has put down this sentiment in print already, and for once I can judge the consensus to be correct. What we’re witnessing is not the jolting artistic revolution of the New Wave in France in the 50s and 60s, nor of the New Hollywood in the 60s and 70s, but the progress is most heartening, though the pace is not. Directors with bold visions and the courage of those convictions are what is required to break through and introduce to us the ecstatic possibilities held by this country’s artists.