“Jeanne Dielman” and Why We Need More Women Filmmakers 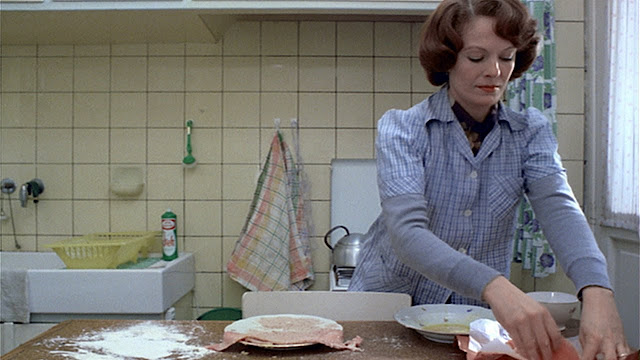 Over the weekend, I posted about the MUBI Film Schools Program, which allows any user in South Africa to stream selected films for free, and to which any South African can sign up for free. My first experience of it was, as I wrote, a major event; the second, which this post is about, was a great wonder. Its full title is Jeanne Dielman, 23, Quai du Commerce, 1080 Bruxelles; it was written and directed by the queer Belgian filmmaker Chantal Akerman and released in 1975; and it’s rightly heralded as a revelatory breakthrough of feminism in cinema, in that not only is it a great and momentous film made by a woman, but it takes a woman’s view of a woman — of women and the lives of women — as its subject, and puts forward vast and pointed ideas about that woman, about that woman’s view, about those women’s lives, and about the political circumstances and imperatives of those lives that could not have been done so strongly and so exquisitely not only by any man, but by any other filmmaker in history. Akerman — who tragically committed suicide in 2015, at the age of 65 — shot the film with an entirely female crew, which would have worked out alright, except that she didn’t get to choose any of them. Working off a government grant (of about US$120,000), she was assigned a crew, and, though she didn’t appreciate the directive, she managed to deliver one of the crucial works of movie history at the age of twenty-four years.

Jeanne Dielman follows its petite bourgeois title character through three days of her life, as she performs her routine domestic tasks, such as cooking, cleaning, babysitting, and tidying up. (The rest of the title is the address of her Brussels apartment, where she lives with her son.) It also depicts her work that she takes on to support herself and her son, namely prostitution. While he’s away at school, she discreetly accepts gentleman callers who arrive soon after she’s placed her food on the stove and leave a little while later, as she prepares to set out dinner. Her daily activities (excluding her sex with callers, but including a nude shot of her cleaning herself in the bath) are shown in real time and very long takes, all in pretty much the same framing, with the camera entirely stationary throughout each scene and at table-top height, at an equal distance from the subject at all times (and the subject is just about always Jeanne Dielman). An interruption to her routine is introduced on the second day, and the startlingly spiralling and abstracted psychological after-effects of it throw that very routine and its vast web of implications into harrowing relief.


This consistent method of shooting may sound bland and monotonous as I describe it, but it’s soon apparent that it’s the unfolding of a sublimely distinctive and original cinematic style. First, any notions of blandness or disinterest are obliterated as the sharp attention to colour and light, the engaging views of textures, gestures, movements, nuances, and shadows, and the bright evocation of a housewife’s kind of dance become clear. But, soon afterwards, it becomes equally clear that Akerman is filming not to stoke any effects or reactions, but to seriously look at and consider what her character is doing and undergoing. She respects her character’s space and her behaviour and movements through it. She brings about a sweeping drama consisting of anyone’s routine chores, seemingly superficial interactions, and very little dialogue. She imparts the same serious consideration in Jeanne Dielman to a trip to the post office, to the preparing of veal cutlets or the peeling of potatoes, and to making a bed that other great directors do to a long, declaiming monologue, a shoot-out, a romantic encounter, or any other typical movie action. Akerman explained her approach in terms of rectifying past practices:

If Akerman’s political rhetoric sounds stringent to you, it’s probable that her film wasn’t made for your consideration or appreciation. If it appeals to you, but her movie’s full running time does not — it runs for three hours and fifteen minutes — I might suggest watching it in three one-hour segments, all the better to savour and contemplate her exquisite work as it unfolds. And you may find that that unfolding takes place at an arduously slow pace (I found it transfixing in its deliberateness and keen, respectful comprehensiveness), one that offers no visual variation in the form of point-of-view shots, moving shots, close-ups, high shots, low shots, or oblique angles (though, again, I found the variations in light and shadow excessively interesting and engrossing), but I hope to convince you that an actively attentive viewing will be captivated and aptly rewarded. The substance of what one views far transcends the mere images on the screen, even some of the most startlingly original and keenly perceptive images ever crafted.

The subject of Jeanne Dielman is ultimately that of identity, including unspoken vectors of identity involving wartime traumas only hinted at in the dialogue (Akerman’s mother, to whom she was close all her life, was a Jewish survivor of the Nazi concentration camps). The title suggests that Jeanne is easily and succinctly identified; as she gradually comes to confront that ease, she approaches the realisation that it should be more complex; that, underneath the many tasks she completes and activities she goes about, it really is more complex, more uncertain, more unruly, darker, and far larger; and that, in her fulfillment of her appointed functions and tasks, she has aided in the overlay of a superficial, one-dimensional, controllable plane of being over her true self. Akerman asserts that this erasure of women’s true selves and the enforcement of a system of control over them is a systemic act of violence; when that overlay cracks and the woman’s repressed being breaks through, the ultimate effect is a resultant violent reaction, erupting with a destructive, possibly even catastrophic force.

Men are absent from the centre of Jeanne’s life — she’s been widowed for about six years — and only appear briefly on screen (though her son and her callers hold immense import in the movie’s drama). Yet, even with no man to explicitly control or direct her, Jeanne lives in dutiful obeisance to an overarching patriarchal society’s demands, most significantly of her labour and her conformity to an artificial domestic ideal. Akerman has succeeded supremely in illuminating the everyday lives of a woman far above the usual matters of generic movie spectacles, and Jeanne Dielman is the sharpest argument I’ve witnessed in the fight to get more movies made by women, and to give the opportunities to make movies to more women. It demonstrates what the male-powered cinema, for all its shining accomplishments and glorious instances of greatness, obliviously and troublingly elides.

As mentioned in a LETTERBOXD review by the user nathaxnne walker (undead), Jeanne’s routine unravels as she steps back from it, taking a break as well as contemplating it. Perhaps she realises, to her horror, the degree to which she is under the control of an exacting system. That loss of comforting order and the illusion of self-control is complete when, in the only one of the film’s scenes that shows her performing her work for clients, she orgasms, totally against her will — though, of course, there’s no sign that she is having sex against her will, only that she has lost control of her body and, in biochemical and neurological terms, of her mind, even if only for a few seconds. The effect is thundering, since, as with the rest of the movie, those few seconds are magnified and amplified to display the full dramatic implications of even the most ostensibly mundane and undramatic actions and activities. Akerman’s keen perception, her deep contemplation, her ecstatic beauty and furious pursuit of ideas and visions are what launch the work to the very top of cinematic creation.

Edit (22 May 2018): I’ve just watched the 2009 interview with Akerman shown below, in which she discusses the connection between her character’s routine and suggested identity, many viewers’ dismissal at the first screening of the film at Cannes, and its subsequent popularity and success.